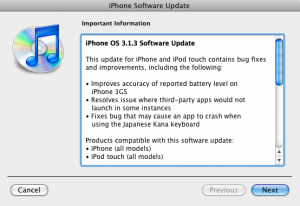 Time to dock the iPhones and iPod Touches people, because there’s an update ready to go. According to Apple, here are the fixes:

This update for iPhone and iPod touch contains bug fixes and improvements, including the following:

I know, it doesn’t sound very exciting, but the battery issue is good enough for me. I’ve had issues recently with thinking I had more juice in the iPhone than I actually did, leaving me stranded in the late afternoon. A bit annoying, but that’s what car chargers are for I suppose.