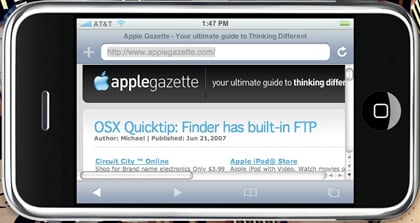 Apparently, the iPhone has been completely unlocked using a Turbo Sim Card. Testers say it will give you “full calling, SMS and GPRS data capabilities with any network”

The hackers are claiming that this method doesn’t use card readers and it doesn’t depend on your previous card version either, so it doesn’t matter if it is a V1, V2 or V3. All of them will work fine.

Gizmodo has more, and it planning to test the Turbo Sim Card (which costs $80 ) as soon as they get them in stock.

I don’t know about you, but I’d still be pretty darn leary about dropping $600 on a phone, then another $80 on a card, when a software update could come down the pipe and blow it out of the water (of course, you could just not update the software, but then you’d miss out on the new features down the road).