by Michael 14 years ago8 months ago

Many people are saying that the 2008 Presidential Election may be the most important election in our nation’s history. That may or may not be true, but there is no denying that it is a terribly important election, and I know many of you are swept up into it like I am. 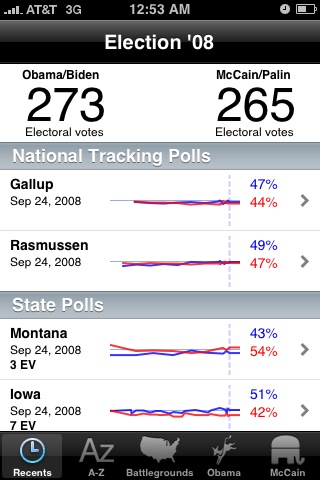 The main problem I have though, is that I like to look at polling information – but I don’t necessarily want a news commentator’s opinion on that information. So when Chimp Software released Election ’08 into the App Store for $0.99 I bought it immediately.

The initial version left much to be desired. It didn’t have the polling sources listed, and the information was not terribly current – but the Application has come quite a long way in a short time, and I can say now that it’s well worth your $0.99 if you’re interested in political polling.

The App not only tells you who’s winning in the polls in the battleground states, it also shows you how those states have voted in previous elections as well. There is a plethora of information available at your fingertips.

You can find Election ’08 in the App store here.