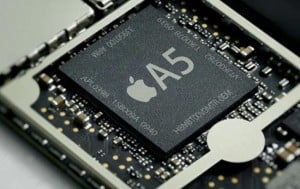 Hot on the heels of the iPad 2’s launch is news the iPhone 5 will receive the newest A5 CPU and double the storage.

It has been rumored for some time the iPhone 5 would receive a much faster processor that would be on the same level as the iPad. Las week’s announcement the A5 CPU would be powering the iPad 2 has sparked rumors it would also power the next generation iPhone. This rumor has been confirmed by iClarified.

Sifting through the newest SDK of iOS 4.3 revealed the iPhone’s support for a CPU titled the â€˜S5L8940â€². Independent research by a developer and hacker namedChronic shows the iPad 2 is powered by the â€˜S5L8940â€² CPU which in reality is the Dual Core A5 CPU:

In addition to a confirmed rumor the iPhone 5 will have a much faster processor is news Apple will be doubling the storage in the next generation phone. The current iPhone and iPod Touch top out at 32 and 64 GBs of storage respectively. The former has enough room for one flash chip while the later can fit two. Apple may have found a flash memory supplier than can create a single 64 GB chip.