You are here: Home / Feature / How Apple’s Maps are Better 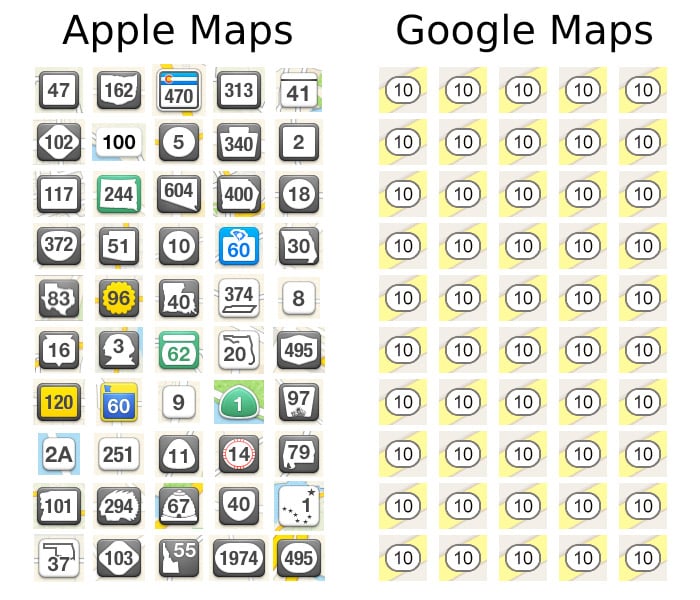 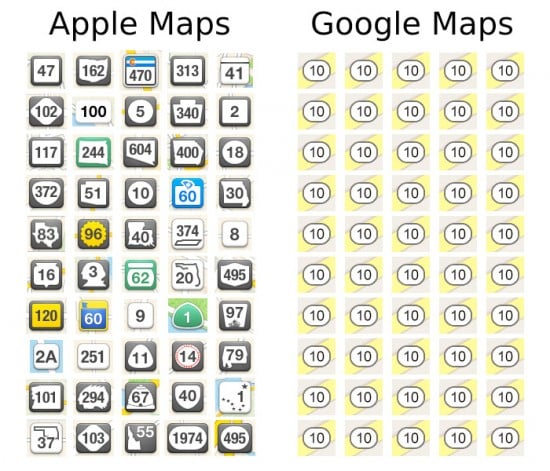 One place Google cannot top Apple is in the elegance of design. Design has always been the trump card in Apple’s back pocket, and it’s every bit as true with Apple Maps. And I’ll prove it.

A Reddit user posted this funny image (above) earlier today, and it got me thinking… Aren’t Apple’s maps designed better than Google’s? I think it’s an interesting question, because with all the flap about the problems with Apple Maps‘ accuracy, the visual quality of what Apple has created is being completely ignored.

So… Is the image above accurate? Are Apple’s road markers — and more to the point, Apple’s standard vector maps in general — more interesting to look at than Google’s? Apple has always put a huge emphasis on design, beauty, and aesthetics. Do Apple’s maps provide more of a feast for the eyes than the competition?

To find out, I decided to do a side-by-side comparison of my own, using the standard, aka non-satellite view of each mapping system, with a major city. I picked Los Angeles as my test subject because it’s a diverse area with many different kinds of roads and terrain and points of interest. Here’s a look at how the two mapping systems render L.A. (Apple is on the left, Google on the right.) 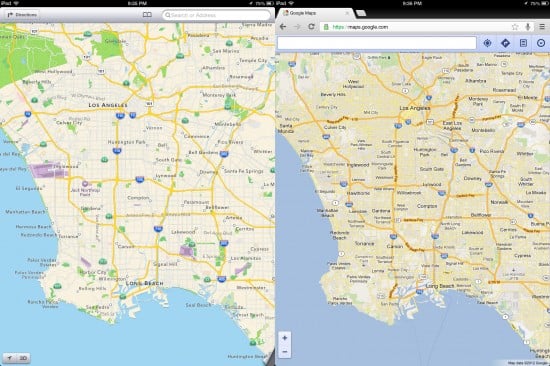 This is obviously an enormous image, and you’ll want to click on it to get the full-sized version for the best comparison. What strikes me is that yes, Apple’s rendering of Los Angeles is a lot more pleasing to the eyes than Google’s completely utilitarian approach. For starters, Apple’s is more colorful. Airports are shown in purple, wooded areas and forests are in green, and yep, different kinds of roads are shown with different shapes (and colors) of road signs.

To be fair, Google does use different sizes and colors of road signs as well, though not with as much variety. Google also colors its wooded areas green, but it’s a less noticeable shade than Apple’s, which really pops off the screen. That seems to be descriptive of almost every element of Google’s maps: everything is rendered in muted colors. There’s not a high level of contrast between the various shades of blue, yellow, white, and green. Apple, on the other hand, put a lot more thought into its color choices, not shying away from bright, vivid colors that both contrast and compliment one another.

Look closely, and you’ll see that Apple’s graphics are sharper, its lines crisper. Even the font Apple uses looks as if it was chosen because it’s clearer and easier to read. Another little touch you won’t notice unless you look at it at its full size are the drop shadows in Apple’s maps. Check those road signs again: each one has a tiny drop shadow underneath, giving it the effect of looking like it’s floating just over the map. All of the road signs show subtle gradients as well, giving them a softer, more stylized, almost 3D kind of look.

Now look at the edge of the land mass. That same drop shadow shows up here, too. Again, it’s a very understated graphic effect — the kind of thing that most people would probably never be conscious of — but it’s a trigger for the eyes that conveys something to your brain, almost on a subconscious level. It shows the difference between land and sea in a way that’s crystal clear, yet doesn’t draw attention to itself. This is precisely the kind of thing that Apple has always excelled at, and all of these minor effects add up to something beautiful that works together as a complete design scheme.

There’s no question that Apple’s rendering is more simplified, more pared-down; Google’s map shows loads more detail. But as with all things Apple, simplicity is key — and it’s never simplicity for simplicity’s sake. It’s about providing the optimal user experience. I have no doubt that a great deal of thought went into what level of detail Apple’s maps would show, so as not to overwhelm users with too much data.

But I can already hear the haters… “So what, man? Yeah, Apple’s maps are pretty, but looks aren’t as important as whether or not the thing works!”

I don’t disagree. Form does not trump function. But all Google has is function. It’s bland, it’s busy, and it looks like it was created by a computer rather than a person. Apple’s philosophy has always been to balance form and function, making each one better by virtue of a perfect symbiosis between them. I’ll grant that Google has the more functional mapping system. But that’s a very temporary situation. Apple never stops upgrading and improving its wares, and I have no doubt that very soon, Apple’s maps will offer every bit as much usefulness as Google’s — with a little something called design to go along with it.