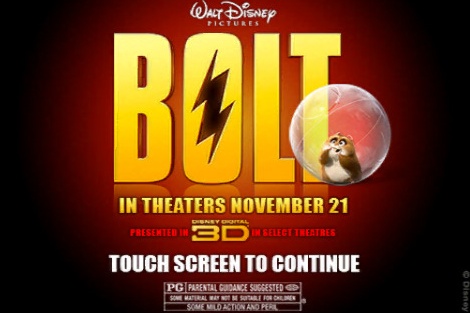 We’re seeing more and more iPhone Apps that also double as advertising for movies and video games. It all started with “The Dark Knight” earlier this year. The App was simple, but fun, and it allowed you to add some Joke-inspired graffiti on photos of your friends, enemies or…whoever.

Then Star Wars got in the mix by pulling a lightsaber inspired free app, and replacing it with an app that was similar, but served more to shill “The Force Unleased” than anything else.

Now we’re seeing the trend continue with the new Quantum of Solace App, which serves as little more than an iPhone native website about the film.

The only one I’ve seen so far that seems to have it close to “right” in my opinion is the game “Rhino Ball” which is intended to promote the upcoming “Bolt” from Disney. This game is a three level, “Super Monkey Ball” inspired app that does a decent job of actually being entertaining while also promoting the film.

If Hollywood is going to continue this trend of filling the App Store with promotional Apps, I sincerely hope they up the quality soon. If it’s a promo piece – that’s fine – but come on…you can make a promo piece that’s also fun and engaging. If they would spend a little time on these things, they could be very cool – but right now, no one has really put in enough effort to make it a promo piece that people could also give a rave review to…and wouldn’t that be something worth downloading?