Hack an Apple, Get Smacked: Apple Bans Apple ID for... 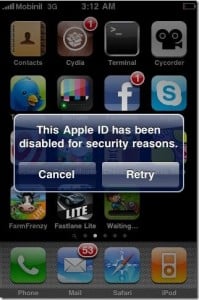 This is all over the web, and I’d be remiss if I didn’t mention it here. There’s a dude named Sherif Hashim, and he recently found an explot in OS 3.1.3 which would let you do all sorts of fun jailbreaky-type things to your phone, none of which I technically understand. What I do understand is that Apple knew about it, wasn’t happy, and told him to pound sand when he went to login to his App Store account. Of course, he tweeted about it.

“Your Apple ID was banned for security reasons”, that’s what i get when i try to go to the app store, they must be really angry :)))))

and guess what my apple ID was, “sherif_hashim@yahoo.com”, what a fool was me not to notice :))), can’t help laughing, they are babies :)))

First, a comment. Sherif is obviously a smart guy, because finding a needle in a haystack like he did is pretty impressive. On the flip side, does he really need 5 smiley faces in his posts?

Turns out this wasn’t an isolated incident, because one of the guys who designed Sn0breeze was banned too, and he, of course, tweeted.

I don’t know why this is so particularly shocking. In fact, I’m surprised that Apple didn’t do this sooner. Sure, they haven’t cracked down on jailbreakers recently because theoretically it gets them more sales, but at some point they have to say enough is enough and stop letting the instigators play in their sandbox.

That said, I’m down with jailbreakers. I don’t own a jailbroken iPhone, but I have friends that do, and they love it. Plus, it gives you a reason to leave AT&T, which is good unto itself. The way I see it, this is just a speed bump on the development trail.