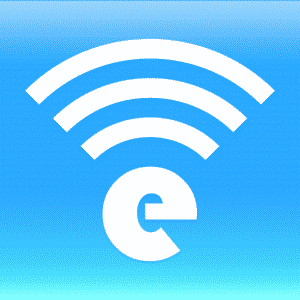 Want to find free WiFi access from any location when traveling? Want to stop the annoying network requests that bombard the iPhone every other minute when moving around on a local campus or city street?

Simply acquire the new version of the â€œeWiFiâ€ App, one of the App Storeâ€™s Top Free downloads!

Every ten seconds the â€œeWiFiâ€ App searches vigorously for wireless network access points nearby, and it then lists them according to their potency. This simple application allows users to not only search and sift through the available Internet services to use on the iPhone, but the â€œeWiFiâ€ App also keeps an ingenious Known/Ignore List. 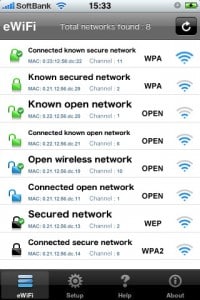 The WiFi networks appear and are named so that the user can automatically use a Known network that is free and strong. The â€œeWiFiâ€ application also allows for a network to be avoided by intuitively placing the annoying and/or weak access point on the Ignore List.

The Ignore List is an amazing feature for anyone near a large, but terribly futile free network. Living on Long Island, the local cable company has provided such a one as this and the iPhone is constantly trying to log onto it; with the â€œeWiFiâ€ App the touch-screen is finally free from the interruptions of the cable company access point, which is virtually everywhere in lower New York.

On a university campus there are myriad wireless networks in a relatively small area, and the â€œeWiFiâ€ App graciously allows for the filtering of them all to find the best free access points in the college coffee shop, classroom or library! The application also has an Auto Connect feature that connects automatically to an open WiFi network if enabled.

The newest version of â€œeWiFiâ€ will be available at the end of the month and it will have exciting new features such as the Known/Ignore List, the customization of the network list, sounds and the ability to remember passwords for secure networks. The iPhone is now online and free!