by Tanner Godarzi 12 years ago9 months ago 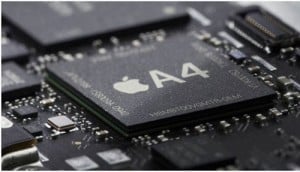 Apple is no stranger to the hardware arms race. RIM, Motorola, HTC and Samsung just to name a few are packing their high end smart phones with circuitry that would make a computer jealous with dual core CPUs being the newest trend. According to an analyst however, Apple could be bringing a dual core CPU to the iPad 2 and iPhone 5.

Analyst Ashok Kumar believes Apple will be bringing a pair of ARM A9 Cores to the next generation of iOS devices.

â€œApple is on track to refresh the iPad by March and iPhone by late summer. A key component upgrade across these platforms will be a dual-core processor featuring a pair of 1GHz ARM Cortex A9 cores,â€

Is Apple developing a successor to the A4 (a fusion of an ARM A9 core and GPU) that will pack double the cores? Only time will tell what silicon Apple’s working on thanks to its purchase of PA Semi.

I have a feeling the next iteration of iOS devices is where we’ll start to see Apple flex some more custom silicon as it starts to apply PA Semi’s work.