Drift off to Sleep with “Sleepmaker: Rain”

by Michael 13 years ago5 months ago
3 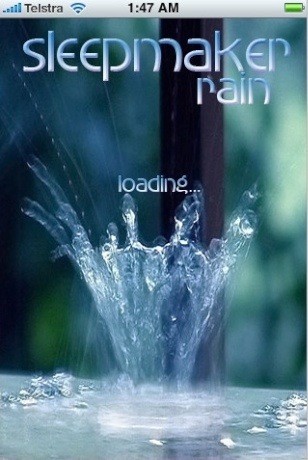 I laid down late last night, unable to really go to sleep. I had gotten off a plane earlier in the day, and my head was still ringing from the strange things my sinuses decided to do in the Seattle air.

Jetlag can do that…make you restless, I mean. So in an attempt to give myself something to focus on other than the fact that I couldn’t go to sleep (which seems like a really counter productive thing to focus on) I cranked up an App that I’d had on my phone for a little while, but I hadn’t really used….Sleepmaker: Rain.

This app was created by a listener of Apple Gazette Daily, and he sent me a very nice email about it when it launched. Even giving me a little credit in the creation of the app because I made him aware of MacTenta.com – the same place I met my current development partner.

Much to my surprise after a few minutes of focusing on the rain – I was out. I woke up this morning kind of surprised…I haven’t fallen asleep that quickly in a long time.

What makes Sleepmaker sound so good, and so soothing, is the fact that these rain sounds are real. They aren’t synthesized on a computer. All the audio in the app was recorded between Jan – Feb 2009 in the World Heritage Listed Forests in Tasmania, Australia.

So that’s about as authentic as nature sounds are going to get. There are no animal sounds to give it atmosphere or background music or anything like that….it’s just rain…and it’s great.

You can actually try out Sleepmaker: Rain for free by getting the lite version right here. If you’re ready to jump in drop $1.99 on substantially more audio, you can grab the full version here. If you’d prefer the natural sounds of a full-blown storm, you can also download SleepMaker: Storms.

I’ve tried several of these “nature sounds” apps in the App Store, and Sleepmaker: Rain is exactly what I want out of one of these Applications. I highly recommend it.