Donâ€™t Miss a Score with the Hockey News App 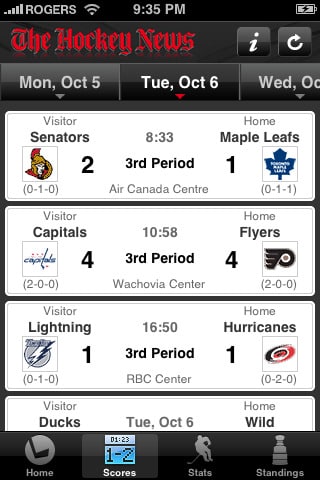 As the U.S. hockey team is poised to battle with the Olympic powerhouse, in team Canada, there is one App that is a must have: â€œThe Hockey Newsâ€ application.

When an entire game might consist of sixty minutes and just one pivotal goal being scored, does the hockey fan risk missing such an incredulous feat, such a mind-blowing universe shaking goal, by going to the bathroom?

Welcome â€œThe Hockey Newsâ€ App, which is free for the iPhone! Do not face the embarrassment of hockey fans everywhere by coming out of the john without your friends having heard your cheering from the porcelain throne. How could a true fan miss the game-encompassing goal? The hockey fan cannot miss it.

Fire up â€œThe Hockey Newsâ€ application and immediately the fan is greeted by live action scores of the current ice hockey games being played; the teams, the scores, the game times, the venue, the teamsâ€™ records are all shown in an intuitive day of the week setting. Switch back to yesterday to view the results of all the games past, or thumb tomorrow to view all of the future matchups.

There are also statistics and standings categories that allow for the hockey fan from New York to follow the Rangers or the Islanders as they attempt to push toward the playoffs, because someday in my lifetime they might see some success.