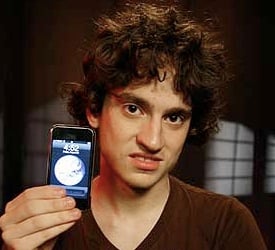 I don’t talk a lot about hacking the iPhone here, but a big story this week has been George Hotz and the fact that he was the first to fully unlock the iPhone. I was reading an article over at Macenstein, and it brought up a good point.

One of the questions about the unlocking of the iPhone is the legality of it. Hotz believes that he is protected under the DMCA (Digital Millennium Copyright Act) because of a clause allowing you to unlock a phone for personal use…then it was reported today that George traded his unlocked iPhone to a Kentucky-based mobile phone company in exchange for a Nissan 350Z, and 3 brand new locked iPhones.

Suddenly, that’s not so much of a personal use issue anymore. He has definitely profited form unlocking the phone. What do you think he’s going to do with 3 LOCKED iPhones? Gee…I’ll be he unlocks them.

If he does, and he trades those away…he could be in some serious trouble.

AT&T is NOT happy about this.

Apple is probably not so happy either…and George could very well find himself on the news again…as part of a lawsuit.

I think it’s impressive that he’s managed to pull this off, and I wish him well in his future endeavors, but I think it would probably best for him if he just stepped back, and didn’t make too much noise…and hope Apple or AT&T don’t go after him.

If you want to check out Macenstien’s article, click here. It’s a good read, and I agree 100%.