“Bone” is now available for your iPhone 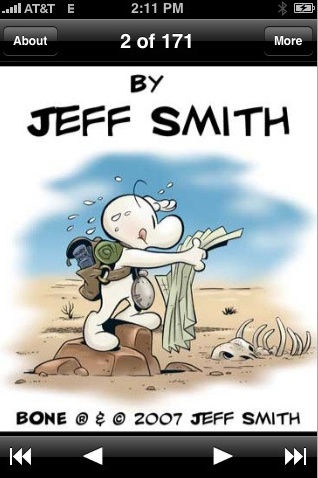 “Bone” is an amazing comic book series from Jeff Smith. The book was originally published as black and white indy comic in the 1990s. I had the pleasure of meeting Jeff in the early 90s, and he is one of the nicest comic book creators I have ever met.

I have always been a big fan of his series. Recently Scholastic has presented the book in color as trade paperbacks. They’re wonderful, and I highly recommend them.

The folks at Uclick have released the first issue of Bone for iPhone using their own comic book reader software. It’s only $0.99 and well worth the price. It’s the complete first issue, and the book works well on the mobile platform.

For full disclosure’s sake, I should mention that I’m working on my own comic book reader app for the iPhone, which will compete with uClick – but I think they’re off to a great start with this title. I think the comic reader should be a little more intuitive than they have it, but that’s just a matter of personal preference.

I love the idea of digital comics, and it’s nice to see some professional, high quality work in the App Store. Click here to check it out.