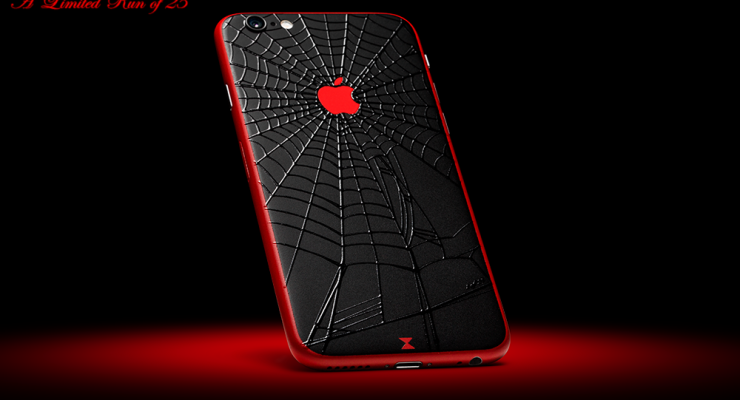 If plain silver, space gray, or white doesn’t do anything for you, then the Black Widow iPhone 6 might just tickle your fancy, although Black Widow will probably do more than that.

ColorWare, a maker of customized tech products, is releasing a limited edition Black Widow iPhone 6 very soon. You won’t see the face or silhouette of Natasha Romanoff, but the glossy, raised black spider web pattern and matte black panel plus a red border and Apple logo is (almost) just as good.

There will only be 25 units of the Black Widow iPhone 6, each numbered uniquely. The phone is a real certified Apple product and comes in original packaging. The front has a fingerprint-resistant oleophobic coating.

It is also unlocked, meaning it will work with most phone carriers, including those abroad. Verizon users, you’re out of luck, though. That’s one of the U.S. carriers the phone isn’t compatible with. The novelty of a spider and its web are deeply rooted in comic books and movies. And now, ColorWare has spider fever too. You can get an iconic spider web printed on the iPhone 6.

ColorWare created a delicate and glossy raised pattern that is reminiscent of a spider’s web. The web is slightly raised on the back panel of a matte black iPhone 6. The spider’s woven-like web is complete with the Black Widow spider accents. The logo, the sim card tray, the surrounding edges of the iPhone 6 and a small hourglass shape that is symbolic of the Black Widow spider are finished with Formula red matte paint.

You know what would be fun? If its Siri had Black Widow’s voice.

Each phone will set you back a nice $1599 (for the 16GB), probably much less than a date with Scarlett Johansson.

Interested? Order here. The phones will ship in two to three weeks.