Ballmer on the iPhone: “No chance.” 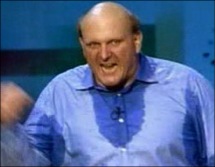 Steve Ballmer on the iPhone:

â€œThereâ€™s no chance that the iPhone is going to get any significant market share. No chance. Itâ€™s a $500 subsidized item. They may make a lot of money. But if you actually take a look at the 1.3 billion phones that get sold, Iâ€™d prefer to have our software in 60 percent or 70 percent or 80 percent of them, than I would to have 2 percent or 3 percent, which is what Apple might get.â€

Now, some people have pointed out, that people thought the same thing about the iPod…and that’s true.Â  I’m not going to get into a super-rant here about why I think this statement is wrong…because I’m not sure that it IS wrong.

Apple will probably not dominate the cellphone market like they do the media player market.Â  There are already billions of phones out there, and on top of that, they’re currently only with one carrier, so the market has a cap on it right now.

But there is a line in this that I think is really great…”they may make a lot of money” but Ballmer would prefer to have his software on up to 80% of the phones out there.

Me personally…I’d rather make a lot of money.