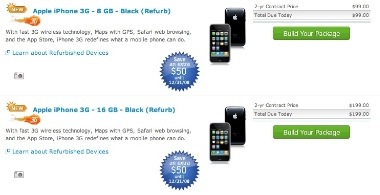 Wal-Mart is officially selling iPhones now, but there is no $99 unit in sight….at least not there.

This situation has led some to speculate (and then pretend it’s a rumor from a super secret “source”) that Apple will be unveiling a 32GB iPhone at Macworld 2009.

The truth is, at this point – we don’t have a realistic clue what – if ANYTHING – Apple will be revealing at their last Macworld. We do know, however, that you can get a great deal on an iPhone right now, if you’re willing to go with a refurbished model…so go get ’em.