by Kevin Whipps 12 years ago8 months ago
3 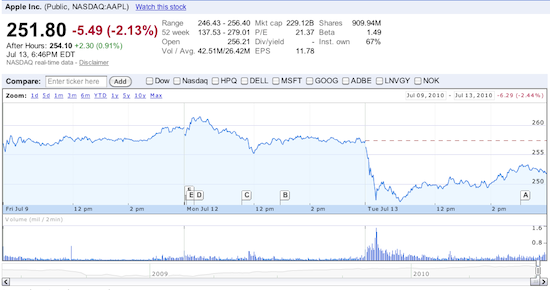 I took the above screenshot yesterday afternoon. It’s Apple’s stock as of 4:03 PM Arizona time, and it’s down 5.49 points on word of the Consumer Reports decision not to recommend the iPhone 4, even though it’s up there in their ratings. This iPhone 4 antenna issue isn’t going away, no matter how hard Apple wishes it would.

Consumer Reports put up a post yesterday clarifying their statement, and it brings up an interesting point:

In ourÂ reporting and aÂ video yesterday, we made the point that the signal drop that iPhone 4 customers have observed when theyÂ hold their phones the “wrong” way is realâ€”and we’ve called on Apple to do something about it. In an earlier statement, the company noted that attenuated performance isÂ a “fact of life” for every wireless phone. Apple suggested owners mitigate the problem by holding the phone differently or purchasing a case. But those solutions put the onus on consumers and skirt Apple’s obligation to offer a product that works consistently and reliably out of the box.

We think it’s the company’s responsibility to provide the fixâ€”at no extra cost to consumers.

On the one hand, I think that the press has jumped on this issue because Apple is considered to beÂ infallible, and this is a pretty big screw up. After all, a supposed design feature has turned into a drawback for some consumers. On the other hand, not everyone is having this problem. I’ve had a few dropped calls, but when I took my wife’s phone in the other day, we found out that she’s only had one dropped call in the time she’s owned the phone. Me, I’ve had a few, but who knows what the problem was, whether it was AT&T or the phone.

Apple claims that a software fix will work out the problem, but I don’t think that’s going to be the case. Yes, it may fix how the bars are displayed, but the death grip may still drop the call in some cases. What’s the solution?

Here’s what I think is going to happen: Apple sends out an e-mail to all current iPhone 4 customers offering a $30 rebate that goes towards the case of their choosing or a free Bumper. Then, they retool the antenna. I think there are two fixes that keep the current aesthetic without dramatically changing the device. First, they could powder coat the stainless steel trim, probably in a clear finish so it looks the same but protects from short circuits. That should minimize the problem, although I’m not positive it will fix it 100 percent. They could also coat it in a plastic finish, which shouldn’t dramatically change the manufacturing process. So future iPhone 4s have the retool, current owners get a discount or a bumper.

Apple needs to stop being quiet on this issue and either release the update or a statement soon, because this is definitely tarnishing their reputation.