Apple is likely to hit its goal of 1% market... 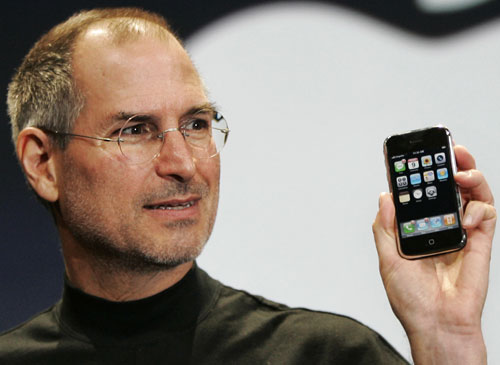 There’s a great deal of debate going on this morning about whether Apple will be able to sell 10 million iPhone units in 2008. The New York Times has grossly speculative article that says that it won’t, and Macworld has a grossly speculative article that says it will…both of these articles seem to be missing the point of what Jobs said at the 2007 Macworld Keynote that introduced us to the iPhone.

It means 1% of the global cell phone market. Jobs made that clear in his keynote, and it was reiterated by Apple on their last quarter conference call.

Apple also clarified that they mean in the 2008 calendar year. For those of you keeping score, thus far, in the first 3 months of 2008 Apple has sold 1.7 million iPhones. That number, as the New York Times article points out, is pretty darn low for Apple to hope to hit 10 million units by the end of the year. That article claims that iPhone sales have “settled down” – which, according to the Macworld article is completely untrue. This “settled down” claim is where the NYT articles kind of falls apart, due mainly to the fact that it projects an overly negative view of iPhone sales, never acknowledging that the first few month of the year are traditionally the lowest sales wise – and completely ignoring the sales of the iPhone for the previous quarter.

The Macworld article falls apart when they try to claim that iPhone sales are going to have an 18% up swing in the second three months of 2008. That’s overly optimistic, especially with all the buzz about a new iPhone coming so soon. It’s possible, I suppose, but you’re not going to prove a point by giving a company an almost 20% sales boost with no reasoning behind it other than that you’re “being conservative”. If there is a reason behind it, tell the whole class, so we can all understand your line of thinking.

Beyond article criticizing, though, there is a bigger issue here. Everyone is looking at what Jobs said incorrectly. Let’s talk about what Steve Jobs actually said at the Macworld 2007 keynote, and what Apple’s actual number are thus far.

At Macworld 2007, Steve Jobs stated “1% market share equals 10 million units. This is a giant market. If you have just 1% market share, you’re gonna sell 10 million phones, and this is exact what we’re going to try to do in 2008. Our first full year in the market. Is grab 1% market share and go from there.” (source)

Let me translate: Apple’s goal is to have 1% market share by the end of their first full year in the market. That translates to 10 million units sold…and they’re over half way there.

Now you can argue that “Jobs said 10 million units in 2008” if you want. I’m sure many people will – but read his direct quote – watch the video if you need to. It’s very clear, the man is saying 1% market share after their first full year in the market.

In January 2008, at Macworld, Steve Jobs announced that they had sold 4 Million iPhones. (source). When you add 4 million to the iPhone sales for the first three months of 2008, you’re looking at 5.7 million units sold.

That puts Apple over half way to their goal, with 9 months left to sell the remaining 4.3 million units. Without doctoring numbers, or making wild speculation I think its safe to say that Apple is well on their way to the goal of 1% market share by the end of 2008, and with the addition of so many new countries, and the 3G technology which will certainly boost sales over seas, it seems inevitable that Steve Jobs will hit the Macworld stage in 2009, reporting that Apple has met its initial goals with the iPhone…most likely exceeded them.