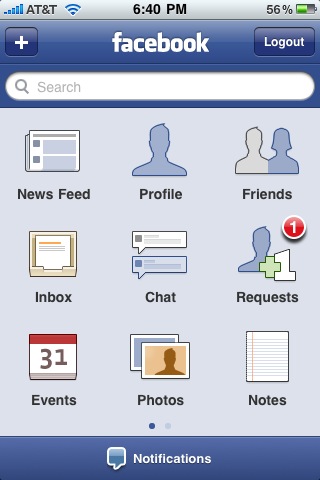 The Business Insider is reporting that Apple is going to be working Facebook into the iPhone OS, implementing quite a few different features. Here’s the gist:

Our source tells us that Apple is at least going to build Facebook contact syncing directly into the iPhone software, so you can pull Facebook contacts into your iPhone’s phonebook. This is a no-brainer, and is already a feature that some of Apple’s competition offers, so it makes sense to include on the iPhone.

We also hear that Apple could be integrating Facebook Connect directly into its software developers kit so programmers can more easily add Facebook “social” features to their apps. But we don’t have details on how that might work.

Remember MySpace? Friendster? AOL chat rooms? The web is a very cyclical place. Trends come and go over time, and what’s popular today isn’t popular 6 months from now. Although Facebook seems to be today’s big thing, there’s been a rising surge of backlash against the company, mostly because of privacy issues. And Mark Zuckerberg, Facebook CEO, couldn’t care less.

Although Facebook will probably ride the wave and get out of this one, who knows for sure where the company will end up? Adding Facebook into the iPhone OS means that when Facebook does tank – which it will – then the iPhone’s features go with it.

This becomes even worse if the third party is supplying a cross platform development tool. The third party may not adopt enhancements from one platform unless they are available on all of their supported platforms. Hence developers only have access to the lowest common denominator set of features. Again, we cannot accept an outcome where developers are blocked from using our innovations and enhancements because they are not available on our competitorâ€™s platforms.

I don’t see Apple telling Adobe to pound sand on one day, but then welcoming Facebook with open arms the next. Sure, everybody else is doing it, but we all know that everybody else isn’t Apple.

I think the answer to this is coming at the WWDC. Until then, I’m filing this under rumors.