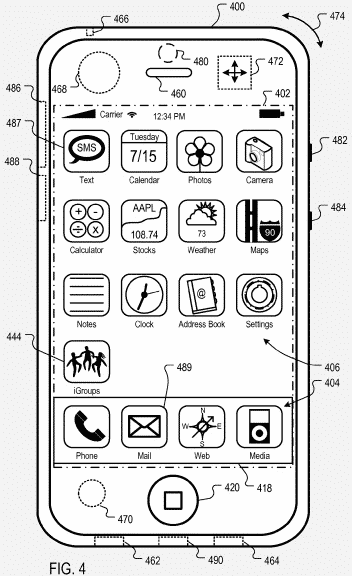 Ever read a patent application? I sure haven’t. But I would if I ever needed to go to sleep in a hurry. Fortunately for us Apple fans, there’s a website that does all of the patent office trolling for us, Patently Apple. This time, they’ve found a patent for a new social networking system for the iPhone, named iGroups. From their article on the subject:

Apple is working on a new communications based social networking application that they’re simply calling “iGroups.” According to the documents published by theÂ USPTO today, Apple’s iGroup will be a new service that will work on your iPhone and likely work with MobileMe. The idea is to allow groups of friends or colleagues attending such events as aconcert, a tradeshow, business meeting, wedding or rally to stay in communication with each other as a group to share information or reactions to live events as they’re occurring. The technology behind the new iGroup social networking applications works with a very sophisticated cryptographic key generation system to ensure security and privacy of your communications. Interestingly, the patent states that if one of the devices in your group happens to be without true positioning technology, it appears that Apple’s MobileMe service will provide some sort of “virtual GPS” capability to that user so that they could be aware of the locations of others in the group.

I’m not so sure how I feel about this concept. For me, social networking is a double-edged sword. Facebook was “the other networking site” behind Friendster and MySpace just a few years ago, and now MySpace has all but disappeared while Facebook has taken over. Starting a social networking site takes a lot of effort, and a lot of support. And if it’s tied to MobileMe, I think it’s destined to fail. How many people other than the Mac faithful are willing to pay $100 a year for e-mail and syncing services? If Facebook starting charging it would be decimated in a week. It’s a risky gamble, and it depends a lot on how it’s setup, so we’ll have to see how it goes. My guess though is that we’ll see iGroups in OS 4.0 this summer.