by Michael 14 years ago3 months ago
9 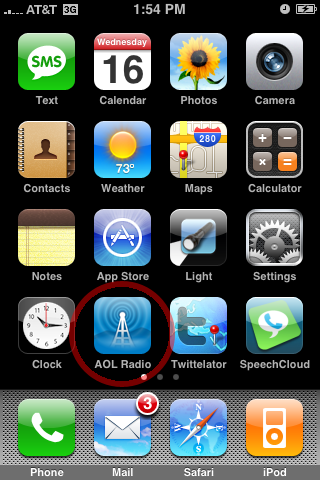 AOL has released an AOL Radio app for the iPhone/iPod Touch. Now, normally, I don’t really pay attention to anything with the letters “AOL” at the front of the title. I’ve never had a lot of use for AOL services, and came at this app with some preconceived notions about what it might be…I’m not sure why, I just did.

Still, when a Twitter buddy suggested that I review it for the site, I decided to download it and see what it was all about. What I found was an easy to use, very impressive, streaming radio application that really surprised me.


The interface is very simple and easy to use. With the press of a button the AOL Radio application will find your local stations and put them at the top of your list. You don’t have to listen to just those, however. You can listen to stations all over the country in a variety of genres. Music stations will even show you the album artwork of the song you’re listening to, and the app will remember you recent songs. 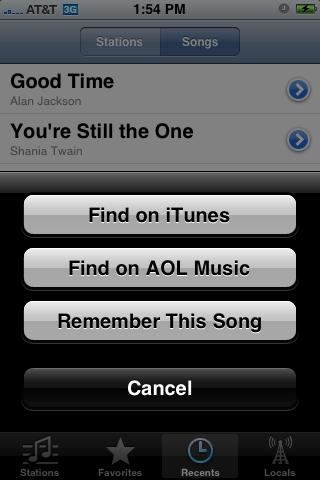 If you find one you really like, you can select it, and then grab the song in iTunes or on AOL Radio. Its simple additions like this that make the app so much more than some of the other offerings from major companies. The PayPal app, for example, gives your balance and lets you send money – that’s about it. This thing, though, is feature rich, and essentially gives you a satellite radio experience in your car…FOR FREE.

I’ve listened to the audio over 3G and it sounds pretty good. You’ll find that some stations are not available while streaming over 3G and EDGE, but a good number of them are there for use in the car. The sound isn’t the greatest audio you’ll ever hear in your life to be sure, but its very listenable (particularly for talk radio…which is about all I listen to anyway).

Overall, if you listen to the radio (CBS owned radio stations in particular) this application is a must have download…and it’s free.

You can get it here.