by Brian Meyer 9 years ago10 months ago
3 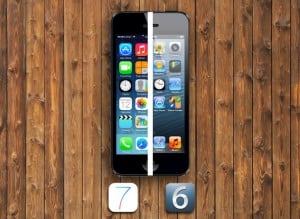 iOS 7 is the biggest update to the iPhone, iPad, and iPod Touch operating systems since the App Store was first introduced. Everything from the display to functionality to even the sounds changed. Some people love change and welcomed iOS 7 with open arms, while others are a little more nostalgic and still love the skeuomorphic design of iOS 6.  If that describes you and you’re thinking about updating your device, here are the top 5 reasons to NOT upgrade to iOS 7 and how to roll back if you did.

There are many people out there that love having their iOS jailbreak. The ability to do an iOS jailbreak stopped with iOS 6.1.2, so any version after that and you’re out of luck.

While many of the features people jailbreak for are included in iOS 7, like Control Center, better multitasking, and better notifications, there are a bevy of other reasons to jailbreak your iOS device.

With the iOS jailbreak, you gain the ability to do fee-free wi-fi tethering, remove 3G restrictions, and tweak every aspect of your iPhone or other iOS device. If you love your iOS jailbreak, don’t upgrade!

The new UI design in iOS 7 has garnered the most positive and negative feedback. It’s amazing how so many people can completely love and hate the same design features so much.

With iOS 7 came what is known as the “flat” design ideology that is so loved and hated. The simpler icons, stacked view of menus, and overall step away from designs inspired by real-world items are the cornerstone of iOS 7’s design. The un-flat design ideology is known as skeuomorphic design. Some people truly love this look, and if you’re one of them, you should probably stick with iOS 6.

As with any major system upgrade, battery life usually takes a hit. There’s no other way to add in tons of new features and functionality without using a little more juice.

There are a lot of new features in iOS 7 that use more power than most people would like. There are ways to save your battery on iOS 7, but these might not be enough. If your battery life is where you need it to be, you should really stick to iOS 6 until a new device with better battery life is in your future.

The speed of iOS 7 on older devices is somewhat of an issue. As with battery life, new features means new processes running. This can slow down the iPhone and other iOS devices pretty significantly.

With the new animations and actions in iOS 7, older devices can be glitch and lose some responsiveness that was present in iOS 6. If you have an older device like an iPhone 4 or iPad 2, sticking with iOS 6 is a really god idea. You gain very little functionality in the upgrade, but gain a lot of speed and battery issues.

The new design of iOS 7 is in one word, bright. From the new wallpaper colors to the bright and cheery icon colors, the whole UI is built around brightness. You can adjust screen brightness in Control Center, but that doesn’t do anything for the colors used.

Those colors bleed through to every menu and screen as well. If you like your iPhone with a variety of color brightness, iOS 7 isn’t for you. Solid, bright colors are everywhere and can definitely be off-putting to many users.

Bonus: How To Downgrade to iOS 6

So, you made the jump to iOS 7 and you have buyer’s remorse? Fear not, for a (very) limited time, you can actually downgrade to iOS 6 once again. This won’t help with jailbreaking again, since you need to downgrade to the latest iOS 6 build, but it will get you back in the iOS 6 boat.

Note: This will only work for a set amount of time, and might even be done with now. Apple uses something called SHSH blobs to control what software goes where. Think of SHSH blobs as a password that expires on a certain date. Once the password expires, you can’t use it. Without the password, the software won’t install.

First things first, stop reading and backup your device. Verify that contacts, pictures, apps, and everything else you use are saved and backed up. Do it twice to make sure. Next, make sure that Find My iPhone is turned OFF in iCloud settings on the iPhone.

Now that you’re backed up, download the iOS 6 package that works for your device.

With the IPSW downloaded, place your phone in DFU mode.

You shouldn’t notice any activity on the device, but you will notice iTunes popping up a warning that it found a device in restore mode.

Disregard any of these messages. Go to the iPhone menu in iTunes and click the Restore button. Choose the IPSW file you downloaded and let iTunes work its magic. If your SHSH blob is good, the restore should happen.

Warning: If the restore works, you will not be able to restore any backups you made when using iOS 7. You can restore to an iOS 6 backup only. So anything you did from iOS 6 to iOS 7 would be lost.

There is a chance this will not work and you will need to restore your device all over again to go back to iOS 7. This is why backups are so very important. If this is something you really want to do, I recommend you jump on it now while the getting’s good.

OS upgrades are usually an overall good thing. iOS 7 brought with it a bevy of features and enhancements that, while paired with some less than appreciated features like Parallax (AKA the Jar-Jar Binks of iOS 7), are overall needed and good. Some people love what they have now and for whatever reason don’t want to make the leap. That’s fine, too. Just don’t complain when new apps don’t work on your version of iOS!