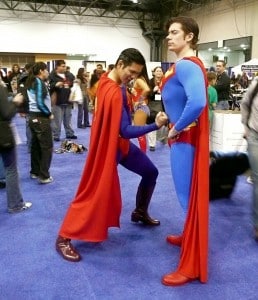 The wait is nearly over and no amount of kryptonite can stop it! The New York Comic Con is returning to the big apple in October, and this year the NYCC is combining with the New York Anime Fest to become the largest East Coast popular culture event of 2010!

People will be flying in from all over the world to gain access to the most cutting edge products, news and, of course comics, concerning television, movies, toys, anime, artwork, video gaming and a host of other bits and pieces that will be filling the Jacob Javits Center for three days. Follow all of the intense action with the official â€œNew York Comic Conâ€ application, free for the iPhone and iPod Touch.

The â€œNew York Comic Conâ€ App is packed with useful news and details on the guests, including the first annual NYCC Spotlight created for the one and only Stan â€œthe Manâ€ Lee! Alongside the official announcements at the top of the intuitive App are Tweets about the Con and Buzz that is being written about the NYCC from all over the world.

Guests are shown, as they are announced, and are complete with pictures and fun biography information, so that when the user thumbs the touchscreen at a guestâ€™s photo, then they can read all about how John Romita Jr. collaborated with Frank Miller on â€œDaredevil: The Man Without Fear.â€

The â€œNew York Comic Conâ€ App has a directory of accompanying web sites and a lot of other fantastic (four) finds! Enjoy!