10 Reasons Why an Apple Phone Would be Cool 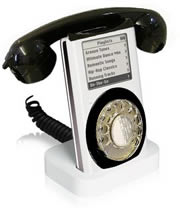 For the longest time now, rumors have spread about an upcoming Apple cellphone. And up to now, these are still rumors. There have been patents uncovered, but later on clarified not to be plans for an Apple mobile phone. And come on, a company’s applying for a patent doesn’t really mean they’ll actually make a product out of it, right? At least not right now.

At any rate, I would like very much to see an Apple phone becoming a reality soon, and here are my reasons.

Okay, I admit it. I use a Windows-powered Smartphone. I have been such a cellphone junkie for almost a decade now, and I’ve owned phones of practically every kind of technology and platform, from the old AMPS analog brick phones to the Symbian-powered communicators (still brick phones, IMHO) and even phones with proprietary OSes. But I’ve since gotten rid of all my other phones, and stuck with my Windows Smartphone. So much for a Mac lover, huh?

While my Windows-powered Smartphone syncs perfectly with my Windows-powered computer, I couldn’t make it talk to my Mac without those expensive add-on software (such as Missing Sync, which still misses some stuff on syncing). Having an Apple cellphone would make life so much easier.

I know every purchase of a Mac came with a license for a holier-than-thou attitude. Of course, Mac users find it easy exude this enormous amount of self-confidence while editing a video or writing a novel at the cafÃ© over a cup of lattÃ©. But I can’t do this while riding a crowded subway train, can I. If I had an Apple cellphone, I just whip it out while riding the Metro, and I would revel in the oohs and aahs of my fellow commuters.

If Apple can do a major shift to a new platform every ten years or so, perhaps they could also port the Mac OS into just about any device, too, such as a mobile phone.

4. Linux and Windows are already on mobiles!

Apple is competing with Windows for market share in the personal computing space. So is Linux. But in the PDA-slash-phone realm, Windows and Linux do have a strong presence. Isn’t it about time Apple took a bite at the mobile market, too?

Having an Apple cellphone would sure be the easiest–and cheapest–way to “Get a Mac.” Now Apple can target switchers not only in the desktop and computer market, but also in the mobile phone market! All this without having to breach the $1,000 price point.

Cellphones can get confusing with all the keys and buttons to press. Isn’t it about time for a phone with only one clicker? Of course, users can still press and hold or CMD-press for other options! Okay, Nokia did this with the Navi-key, but IMHO Nokia’s interface is quite clunky. Apple would be able to do this so much better.

Or, Apple can experiment implementing the iPod clickwheen on its cellphone. Jog dials and joysticks as means of navigation have been explored before. Why not a clickwheel? It worked so well on the iPod!

Apple would most likely do away with calling their cellphone the “iPhone.” Here’s another reason to apply those, umm, un-Apple like names like “MacBook” and “MacBook Pro.” I bet Apple will call their phones “MacPhone” and “MacPhone Pro.” Sweet!

Yes, there were other phones that tried to tie into the iTunes Music Service. But they just plain sucked. An Apple phone would finally give us excellent iTunes and mobile phone integration.

Not enough desktop real estate to put all your widgets in? An Apple phone would solve that. Now you can have all sorts of Dashboard Widgets–both useful and useless–peeking at you from your small cellphone screen.

Oh, and one other thing …

It would be cool to see Steve Jobs at one of his Keynotes saying near the end of his presentation, “Oh, and one other thing …” then take a MacPhone Pro out of his jeans pocket and answer a call.