by Tanner Godarzi 12 years ago8 months ago

Apple didn’t miss any opportunity to take a pot shot at the iPad’s competitors pointing out their low sales, small number of third party Apps and their reluctance to leave “The PC era.” Steve Jobs’ speech revealed part of what makes the iPad great: the competition.

Before the iPad 2’s unveiling, Apple took the time to highlight how far behind the competition is. Steve Jobs didn’t shy away from calling HP, Samsung, RIM and Google’s Android copycats. To reinforce the high number of Apps available for iOS, Jobs ridiculed Android 3.0’s (Honeycomb) support for only 100 Apps in comparison to the iPad’s 65,000. The highlight of Jobs’ competition ridicule was a slide displaying a mistranslated quote from Samsung’s VP Lee Young-Hee. 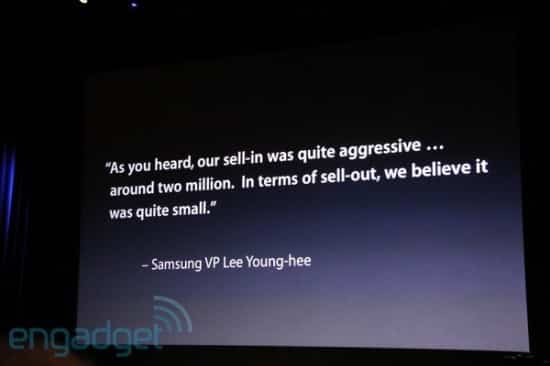 The slide read: “As you heard, our sell-in was quite aggressiveâ€¦ around two million. In terms of sell-out, we believe it was quite small.”

The misquote â€” which had been corrected shortly after â€” caused controversy for Jobs as he intentionally used the wrong translation to hammer home his point:

The iPad 2 is better because the competition isn’t.

Jobs’ downplay of the competition is Apple’s way of defending the market it’s defining with the iPad. Highlighting the follies and laughing at the look-a-likes gives Apple the power to back up its marketing claims while eradicating its competitors. This is no longer a battle of specs or speed, it’s a battle of usability which Apple is keen to point out it’s the king of with the iPad.

The End Of The PC Era

The iPad’s competition wasn’t the only thing Apple downplayed. To wrap up the iPad 2’s debut, Steve Jobs revealed Apple’s entrance in to the ‘Post-PC Era’ something the media is downplaying as hype or taking with some skepticism. Below is Steve Job’s ‘Post-PC’ speech transcribed by Apple 2.0.

I’ve said this before, but thought it was worth repeating: It’s in Apple’s DNA that technology alone is not enough. That it’s technology married with liberal arts, married with the humanities, that yields us the result that makes our hearts sing.

And nowhere is that more true than in these post-PC devices.

And a lot of folks in this tablet market are rushing in and they’re looking at this as the next PC. The hardware and the software are done by different companies. And they’re talking about speeds and feeds just like they did with PCs.

And our experience and every bone in our body says that that is not the right approach to this. That these are post-PC devices that need to be even easier to use than a PC. That need to be even more intuitive than a PC. And where the software and the hardware and the applications need to intertwine in an even more seamless way than they do on a PC.

And we think we’re on the right track with this. We think we have the right architecture not just in silicon, but in the organization to build these kinds of products.

And so I think we stand a pretty good chance of being pretty competitive in this market. And I hope that what you’ve seen today gives you a good feel for that.

Benchmarks and specs may overtake the iPad in some form but Apple’s playing a numbers game with the App Store. To back it, Apple is taking every opportunity to downplay the competition’s efforts.

Apple boasts the iPad isn’t a game changer it’s a category creator. While Tablet PCs existed before the iPad, they were just that: PCs. The iPad is Apple’s shot at dominating the computing landscape while differentiating itself as much as possible from the PC and creating something unique. Anyone that competes with Apple won’t be competing with just the iPad: they’ll be fighting a well oiled marketing machine as well.