The Yankees Hate the iPad 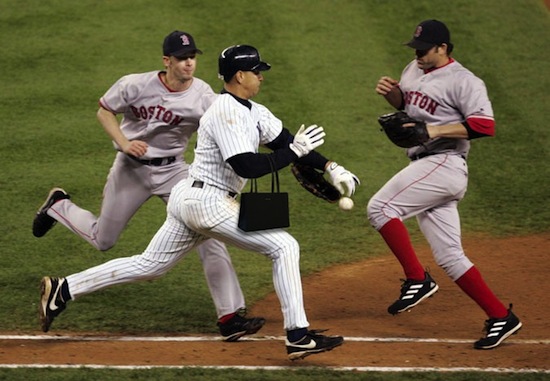 There are very few things in this world that I can honestly say that I hate. I’m not a huge fan of broccoli, but I’ll eat it. I don’t really enjoy flying in the back of a plane, but sometimes it’s all you can do. But I truly and deeply hate the New York Yankees. Most of that comes from where I was raised, Framingham, Massachusetts. I grew up when Roger Clemens was a Red Sox and A-Rod was just dreaming of smacking balls away on legitimate plays. My contempt for the Yankees knows no bounds. In fact, I’ve ordered a shirt for my 3-month old son: “I’m not even able to crawl yet and I still hate the Yankees.”

So when I read this article by Yahoo Sports, I knew that I had to tell the world what the evil empire was up to:

The Bronx ballpark has a policy that prohibits fans from bringing laptops inside, and iPads are included in that ban. The team says itâ€™s a security-and-safefy issue.

Yankee Stadium is among the most tech-savvy parks in the majors. Every player has a computer screen at his locker, in fact.

Major League Baseball says the issue of allowing iPads into stadiums is a team-by-team decision. The Mets, Angels and Mariners are among the clubs that permit the tablet computers.

An Apple commercial for iPad features the slogan that it â€œgoes anywhere.â€ Last week, a driver practicing for the Indianapolis 500 checked one while his car was idle.

You might wonder why someone would want to bring their iPad to a game. Checked out the MLB At Bat App [iTunes Link]? It’s the perfect toy for statistics freaks, and it gives you play-by-play calls. So if you’re sitting in the bleachers, the iPad makes the perfect accessory. Me personally, I wouldn’t bring it to the game for fear of an errant beer getting spilled on it. But then again, that’s just me.

Of course, I couldn’t write this article without first checking to see if Fenway Park allowed the iPad, or even laptops. Turns out, there’s no rule against it that I can find online. But even if they did ban iPads, I would still love my Red Sox and hate the Yankees with all my heart.

Seriously. I really hate the Yankees.