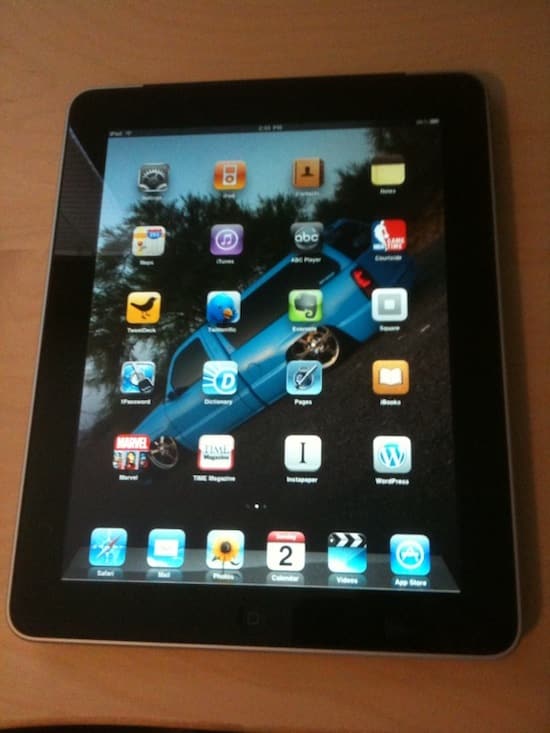 Well, it’s official. I have an iPad. Now here’s how I got it:

After much deliberation, I decided that I couldn’t wait. I chose option No. 1 in my list of three methods to wait for the iPad, I wanted to get to the store at around 3 pm, but my wife had the car until 3:30 or so. Drove me nuts. When she did get home, I hopped in the car, sped towards the mall, and practically ran to the store. I imagined a mammoth line stretching from end to end. What I found when I got there were about 30 people ahead of me, ready to make a purchase. I felt confident.

It took another 15 minutes for the next person to show up, and then 15 minutes after that, I looked behind me to see at least 100 people waiting in line. Holy crap was my timing good.

Being a chatty guy, I started conversations with people all around me. One of them was the guy behind me, and he kept referring to his “iTouch.” I looked for a shovel, but there were none nearby. He said it easily 15 times, and by the time the line started moving, I was trying to stop twitching. Alright, it really wasn’t that bad, and I did have a pleasant discussion about a Mac Mini media center, burning DVDs via Handbrake, and the Verizon Mi-Fi. It went well.

Around 4:30, a nice girl with an iPod Touch came by to note down who wanted which model. It took her until 5 or so to get to me, and that’s when the line was already moving. I was reassured that I’d be just fine with my selection – a 64GB Wi-Fi+3G model – and the next few people should be covered as well.

At 5 pm sharp, the line started moving. There were two guys working the door, and they’d take people in, one at a time, always accompanied by a salesperson. The line moved very quickly, but that’s not too surprising what with the mammoth amount of employees that were there. I counted at least 20, and I’m sure I was under by a few as well.

Finally, it was my turn. I was greeted by my salesperson, and he asked me what I wanted. “I’d like a 64GB iPad Wi-Fi+3G, a renewal for my MobileMe subscription, and for you to activate the device to make sure it works.”

The stunned look he gave me was pretty priceless.

We walked back towards the Genius Bar, where the iPads were stacked up in sections. There didn’t appear to be many 16GB models – at least not many left – but the 32s and 64s were piled high. I wanted to count them, but there’s wasn’t enough time. I guessed at least 60 were left.

The process itself went smoothly. The iPad was setup, verified, and good to go, then I walked out the door at 5:15. No worries at all.

I buy Apple products because I like how they work and function. But more importantly, the people at the Apple Store treat me like a person, not just another sale. They’re able to answer my questions, and they never call me “bro.” It’s the little things like that which make new people into Apple fans, and Apple fans into Fanboys.