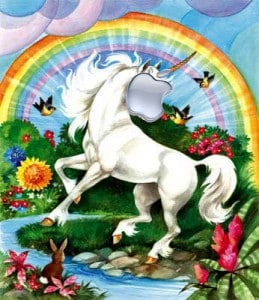 Last time on the Unicorn, I promise. I’ve already deleted it from my desktop.

Time to evaluate how I did on the iPad guessing game. Here’s what I wrote in the first portion:

Why the half point? It doesn’t have an SD slot, but it does have a peripheral with one, so I’m counting that. I think a lot of people are disappointed about the lack of an innovative new multi-touch system, but I’ll get into that on another post.

Now for the more complicated predictions after the jump:

Full point for the interface, because it is different and it works. Half point for the iLife/iPhoto thing, because they mentioned iPhoto specifically with the photo app, and how it syncs across platforms. The last point is for the aluminum body, which was a gimme for me, but only because I figured it would literally be a mix between the two products to differentiate the brand.

When referring to the Kindle issue, here’s what I wrote:

Thatâ€™s why I think there will be something added to iLife that works around that premise, or something just integrated into iTunes. Itâ€™ll be a way to read textbooks, novels, or your favorite gossip rag, on your iPhone, MacBook Pro, or Tablet.

I think this one still has yet to be seen. We’ve got the iBookstore now and iBook, so there is book integration into the iPad, which I think opens up the door to magazines, textbooks, etc, on the iPad. I fully expect iBook to become a product for the iPhone as well as the MacBook, because even though it may not make a lot of sense to read a book on your computer screen, I see Apple wanting to integrate the lines so that the books sell like movies, music and apps.

I think the sweet spot for this thing has to be between $400-800, otherwise it gets too close to being a 13-inch MacBook, and too low is infringing on iPhone territory. Iâ€™d love for it to be on the lower end of the spectrum, but I just donâ€™t see it happening.

I don’t know how much closer I could’ve gotten with this one. $499-$829 works for me, although we’ll see what the public in large thinks come April.

That said, I do think it will have that as an option. If you plan on using your tablet 24/7, then hook it up with Verizon, AT&T or Sprint, but thereâ€™s wi-fi built in too, just in case you donâ€™t want it. That way, the most people are happy with the product, and it opens it up to the most markets.

I was kinda right here. Yes, there are multiple carriers that could be involved. T-Mobile uses mini-sims, so there’s a chance that they will figure out a way to hop on the Apple bandwagon too. Well, if they’re smart they will. Plus, there are two options available for the iPad, making it easy not to get one with a carrier if you don’t need it.

OLED is thin and fancy, so itÂ  works withÂ  the small form factor that this thing has to fit into. But HD is almost a standard nowadays, and soon the iPhone will sport an HD-capable monitor as well. With a form factor that suits movies so well, I think the tablet will have an HD screen, which will help to sell more HD movies on iTunes. That said, itâ€™s costly, so Iâ€™m probably wrong on this one.

And I was. Sure, 720p is technically hi-def, but no one really takes that seriously. I think Apple’s going to have to step up to 1080p soon, or else they’re going to have issues.

But then, here’s the biggie.I said this about the name:

What it wonâ€™t be is iPad or iSlate. Thatâ€™s just retarded.

I stand by it. I think the name is dumb. But I also don’t think that’s going to stop anyone from buying one.