The iPad and Charging

by Kevin Whipps 13 years ago8 months ago
7 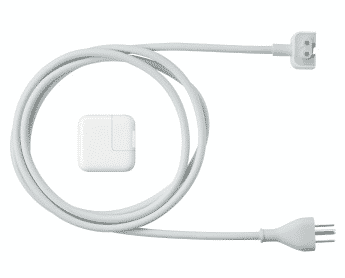 There’s been a lot of talk on the old interwebs recently about the iPad and its charging situation. Let me try to sum it up as best as possible: The USB cable included with the iPad will not charge the iPad on all computers or USB hubs, powered or not. This has caused some confusion in the market, including a few douche canoes who say that it doesn’t charge via USB. Not true, so let me explain.

The iPad takes a lot of juice to charge itself. That’s why it comes with a 10-watt power adapter, similar to the one pictured above but without the fancy cord. The idea is that you charge your iPad like how you’d charge your iPhone in an outlet, but with this very specific charger.

Now that’s not to say that it won’t charge via USB. It will, on some newer iMacs and MacBooks, but it has to be directly connected to the USB port. That’s because there’s a chance that a USB hub – powered or not – won’t have enough juice to kick start the iPad. This has been addressed by Apple in several places. There’s the iPad support site, the iPad Manual (PDF link), and the iPad Important Product Information Guide (PDF Link). Let’s take a look at the notes from the Product Info Guide and see what it says.

Charging iPad To charge iPad, use only the Apple Dock Connector to USB Cable with an Apple 10W USB Power Adapter or a high-power USB port on another device that is compliant with the USB 2.0 standard, another Apple-branded product or accessory designed to work with iPad, or a third-party accessory certified to use Appleâ€™s â€œWorks with iPadâ€ logo.

Alright, so that’s pretty clear, right? But just in case, the Support Site goes into a bit more detail.

iPad has an internal, rechargeable battery. To charge the battery, try the following:
Note: Some USB 2.0 ports and accessories do not provide enough power to charge iPad. When this occurs the message “Not Charging” appears in the status bar next to the battery icon.

And then there’s more.

The fastest way to charge your iPad is with the included 10W USB Power Adapter. iPad will also charge, although more slowly, when attached to a computer with a high-power USB port (many recent Mac computers) or with an iPhone Power Adapter. When attached to a computer via a standard USB port (most PCs or older Mac computers) iPad will charge, but only when it’s in sleep mode. Make sure your computer is on while charging iPad via USB. If iPad is connected to a computer thatâ€™s turned off or is in sleep or standby mode, the iPad battery will continue to drain.

This really shouldn’t be a shocking thing to anyone with some basic common sense. The iPhone and iPod can charge via USB, but they’re tiny devices compared to the iPad. The iPad has a mammoth battery that’s 5 times bigger than the iPhones, so it’s not surprising that USB charging isn’t ideal. But combine that with USB docks that vary with power ratings and low-end computers with poor quality USB outputs, and you’ve got a scenario where you can’t charge via USB. Scandal!

Fact is, this device should be looked at more like a standalone device, not just another accessory to dock to your computer. When you travel, bring the charger with you – no differently than you would with any other portable gizmo that’s not USB powered. And when you’re home, charge it via the outlet as well. Only dock it to the computer when you want to sync, not charge.

Besides, charging via USB is going to be slow at best anyways. Why not juice it up quickly?