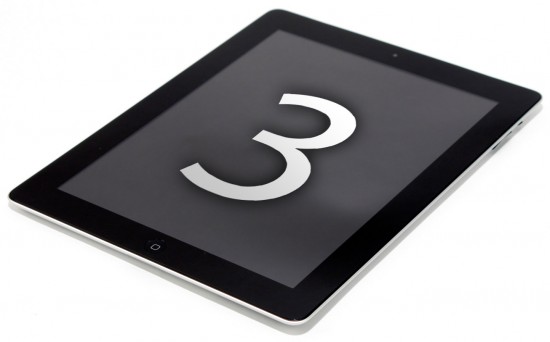 Wednesday is the day. Apple will announce its third-generation iPad at a special press event, and speculation is running wild about what we’ll see. Here are my official predictions as to what Apple has up its sleeves.

Despite a few scant rumors that the new device could sport a name like “iPad HD” or “iPad 2S,” you can expect Apple to stick to the expected name of iPad 3. Apple is nothing if not consistent, and the significantly upgraded specs of the new iPad (see below) warrant an upgrade to a new version number. And also: don’t hold your breath waiting for that rumored 7-inch “iPad Mini.” Notgonnahappen.
Chances: 100%.

Without a doubt the most persistent “insider report” seen all over the media for months has been that Apple is upgrading the iPad to a fully HD, 2048 x 1356 pixel resolution screen. Reports have consistently stated that Apple’s new high-res iPad screen will sport 260 pixels per inch, allowing them to label it a true “Retina Display.” (Before you cry foul that the iPhone set the Retina Display standard at 326ppi, consider this: you hold your iPhone way closer to your eyes than you do your iPad. Your peepers are not going to detect any real difference.) We also hear that Apple has come up with a new “dual-LED” backlighting solution that solves some processing issues — and has the pleasing side effect of making the screen significantly brighter. Sharper screen + more vivid appearance = one killer display.
Chances: 100%.

Even though recent leaks have suggested that Apple is working on a second new chip — a revved-up, dual-core “A5X” — the iPad 3 will require the quad-core A6 to deliver those high-res images and videos to the Retina Display screen. Anything’s possible with Apple, but the A6 is the smart bet.
Chances: 90%.

It seems like a given that if Apple can squeeze an 8MP camera into the iPhone 4S’s modest width, there’s no reason they wouldn’t want to cram it into the new iPad as well. The iPad 3’s Retina Display will need a better camera, to capture pictures that are worthy of showing off on that HD screen. I’m also counting on full 1080p video recording — just like the iPhone 4S. There’s still the front-facing FaceTime camera to consider, where a camera with a crummy resolution would really stick out like a sore thumb. Hopefully we’ll get a front-facing camera with a resolution big enough to look great on the iPad 3’s screen.
Chances: 80%.

Even though Verizon and AT&T’s new high-speed wireless data networks are exclusive to the U.S. (at the moment), it would be a smart move for Apple to at least offer its customers the option of being able to utilize LTE with the new iPad, via including LTE antennas in the device’s innards. The standard 3G hardware would still be in there as well, so we would have the ability to use either one as needed. On the other hand, it’s almost inconceivable that Apple would debut 4G connectivity on a device other than the iPhone. Aside from new processors, the iPhone has traditionally gotten the latest and greatest innovations ahead of iPad (such as many of the items on this list). Not saying that LTE would be less useful on iPad as iPhone. But it would signal something of a paradigm shift for Apple if major new features started coming to iPad first.
Chances: 50%.

I’ve said before that Siri coming with iPad 3 is a no-brainer, and I hold to that. It just makes too much sense not to happen. Plus, integrating Siri’s capabilities with Apple’s digital Textbooks initiative opens up all sorts of exciting possibilities.
Chances: 100%.

The pundits are remarkably silent on the issue of iPad 3 storage space — which did not grow with the move from iPad 1 to iPad 2. A lot of casual users might even wonder why the iPad even needs its current maximum of 64GB. But I’d argue that Apple has to be looking to upgrade iTunes’ library of movies and TV shows to full 1080p (currently iTunes’ idea of “HD” is 720p). So purchasing and downloading those significantly bigger HD video files will require more storage space. It’s time. iPad 3 needs at least 128GB of Flash storage.
Chances: 70%.

As I’ve said above, the new iPad’s upgraded specs are going to require some more powerful hardware across-the-board. A better battery that lasts longer would be a nice surprise, but is in no way required. At the very least, customers will expect their iPad 3’s battery to last at least as long as the iPad 2’s did. Apple whipping out improved battery life would grab some added headlines for them on Wednesday.
Chances: 40%.

9. Immediate Release – Or Close to Immediate

Supply chain rumors suggest that Apple’s been busy manufacturing and prepping iPad 3s for shipping for weeks, even months. Might the iPad 3 be announced on Wednesday as available “starting today”? Apple’s done it many times before, though in this case, if it happens, it would more likely be available “starting today online and next week in Apple Stores.” I can’t recall an instance when Apple has released a major new project to Apple Stores day-and-date with a keynote presentation. (Can you imagine the stampede that would cause? Insanely long lines popping up in just minutes that wrap around stores?) But there’s no reason they couldn’t make iPad 3 “available to order online starting today, for immediate shipping.” At the very least, I’m expecting it to be available for pre-order starting on Wednesday.
Chances: 80%.

You probably know the story by now. Microsoft has submitted its long-awaited Office for iPad to the iTunes App Store for approval. MS is officially denying it, but they’re known for confirming anything (their standard “Microsoft does not comment on rumors or speculation” statement is infamous throughout the industry). It’s happening. You know it, I know it. And the timing of its submission to the App Store lends credence to speculation that Apple might allow its old rival to unveil Office for iPad at Apple’s own media event. I could totally see Apple promoting Office for iPad at this media event, as a way of touting iPad 3’s upgraded tech specs (“iPad 3 is the only tablet in the world powerful enough to run Microsoft Office”).
Chances: 60%.

There are other rumors swirling, too many to include here. One suggests that a new series of Smart Covers will be released for iPad 3 that retain the folding, magnetic function of the iPad 2’s covers, but add protection for the rear of the device as well. It’s also well known that Apple is working on a new version of iTunes (iTunes 11, to be precise), but those reports only began surfacing in the last month, and I believe this Wednesday will be too soon for iTunes 11 to be ready for primetime. That seems like the kind of announcement Apple would save for an event highlighting iOS 6.

Two rumors that do seem likely for this Wednesday’s event — but have little to do with the iPad 3 — are the Apple TV refresh and a lowered price tag for iPad 2. Apple TV is due for an upgrade, and AirPlay is expected to be a big focus of the new device. When iPad 2 was introduced a year ago, Apple stopped manufacturing the original iPad; this time, Apple is more likely to keep making the iPad 2 for at least another year, so they can offer a lower-priced device to compete with Amazon’s Kindle Fire.