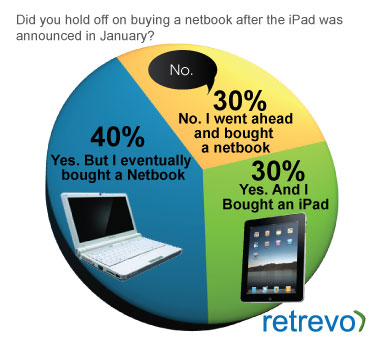 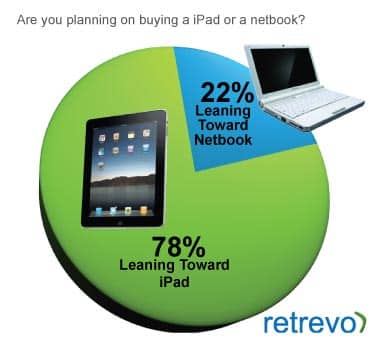 I never really understood the whole netbook thing. A buddy of mine at the office bought one, installed OSX on it, then used it for coding on the go. But for me, I just saw it as another way to get a cheap Windows PC back into my life and that was the last thing I needed. The iPad fills a niche for me, but not the same one filled by a netbook. I use it for consuming, not creating – but if I want to create, I can do that too. For me, it filled a need that I didn’t realize that I had.

But I’m not everybody. Retrevo decided to do a survey among potential netbook buyers, and the results are interesting:

When Steve Jobs took the stage in January and announced the â€œtruly magicalâ€ Apple iPad, we were pretty sure it was going to give netbook buyers pause. As it turns out Apple may have grabbed 30% of those netbook buyers who held off purchasing a netbook and eventually decided on an iPad.

Now that the iPad in all its variations is on sale at your local Apple Store, it looks like consumers who are struggling with the decision to buy an iPad or a Netbook are overwhelmingly leaning toward an iPad with 78% in that group going for the iPad.

Whether you love it or hate it, the iPad is definitely a success. Sold over a million units in record time, and according to this survey, more people to come. I can’t wait until this time next year when we see how the tablet market really shapes up.