by Kevin Whipps 13 years ago8 months ago
3 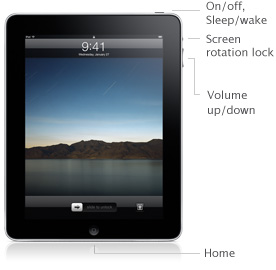 So the iPad pre-order was on Friday. With it, came a bunch of interesting tidbits that weren’t previously noted. Take the picture above, for example. Notice anything new? Oh look, there’s now a screen rotation lock. Just the other day I was checking my e-mail on the iPhone and I happened to be in a slightly reclined position. The screen flipped to the side, then I had to flip it back. Giant pain in the butt – and one that will be avoided with the iPad. I’m also secretly hoping this will be in either iPhone OS 4 or the next-gen iPhone.

Then there’s the battery situation. the iPad comes with an internal battery, and you can’t replace it yourself. What will you do if your battery goes out and you need a new one? Don’t worry, just cough up $99 and Apple will send you a new iPad. Wait. What? From Engadget:

“If your iPad requires service due to the battery’s diminished ability to hold an electrical charge, Apple willÂ replace [emphasis Engadget]Â your iPad for a service fee.”

Holy crap! That’s amazing news, right? At least that’s what I thought, until I followed Engadget’s link to Apple and found something different:

If your iPhone requires service only because the battery’s ability to hold an electrical charge has diminished, Apple will service your iPhone for a service fee.

Well now that’s not the same thing. Looks like someone at Apple reads Engadget, caught the problem and fixed it. But now, thanks to the magic of the internet, it’s here forever for all to see – or, until someone changes the post.

As for me and my iPad purchase, I can honestly say that I didn’t purchase one. In my next post, I’ll explain what might change my mind. Stay tuned!

Update: As many of you have so kindly pointed out, I’m an idiot. I linked to the wrong page. But since I made a point of commenting on mistakes being forever, I’ll just go ahead and leave this as is, as proof of my stupidity.

Here’s the iPad link, which does still say “replace.” Yay!