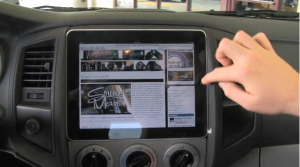 I’ve talked about integrating the iPod and Apple products into your car before, but this latest one takes things to a new level.

The crew at SoundMan Car Audio in California got themselves a shiny new iPad on April 3rd, and went right back to the shop to install it in their Toyota Tacoma project truck. Now at first, this sounds like putting 5 lbs of manure in a 10 lb bag, because that iPad is huge compared to most car stereos. Turns out though, that with the Tacoma, there’s a surprising amount of room in the dash to make some modifications.

So how’d they do it? Out came the old deck and then came some custom plastic work, body filler for straightening and leveling everything out, then a quick coat of paint for finish. Then the iPad was dropped in its new home.

The big question though is how they’re connecting it. They’ve got an iPod 30-pin connector that adapts down to an optical output. That leads to a processor and an amplifier (McIntosh, natch) to push the tunes to the system. All that sounds well and good, but I’m not quite sure how they’re going to charge the thing. Now if they’re integrating a dock in the mix somewhere with a power converter, then that might solve the problem. For now though, they’ve done the hard part and just put the thing in there. They say in the video that they’ll be done this week, so follow along and see how it goes yourself.