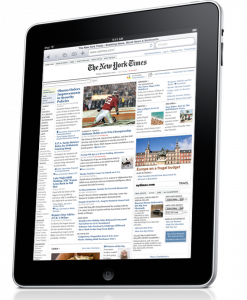 Well that was crazy.

After months of speculation, the Unicorn Tablet has finally appeared and it’s named, the iPad. I’m honestly a bit disappointed in the name, but at least it’s not iSlate or iTab like everyone guessed. It’s designed to fill the void between the iPhone and the MacBook, a place where PC guys have created netbooks, and now Apple has come up with a tablet. Better yet, it’s introductory price is pretty cheap too, at just $499. But what does that get you and what does it all mean? Here are my initial thoughts, elaborations on scribbles on my notepad that I made while reading/watching the keynote.

Man, that thing looks delicate, and I bet someone at Apple realized it too, because they have a case available right out of the box. That’s a whole lot of glass on the front, and it seems like one errant drop would cause quite a problem – and I guarantee that’s not covered by Applecare. I do like though how it looks physically like a mix between the iPhone and MacBook, with the larger iPhone form factor as well as the aluminum backing. It makes it look high-end and expensive, without being gaudy.

The thickness is also interesting. At just 1/2-inch thick, it’s tiny. My iPhone 3GS with an incase Slider case around it, and that’s about 1/2-inch or so, making it a tiny device. At 9.7 inches tall (no word on width) it’s pretty big too, although not mammoth, about the size of my notepad. It’s definitely portable, I’m just not sure how realistic it is to expect people to carry it with them everywhere.

Not quite as revolutionary as I thought, frankly. It’s a blown up iPhone with more horsepower, and no additional fancy moves to make it stand out. Sure there’s multitouch and all that, but my iPhone has the same thing. I expected more, frankly.

As for the Apps, well I think the spacing between apps on the screen looks janky. I’m not sure how many screens there are on the iPad, but I hope it’s at least 9 like the iPhone, plus a search screen. Plus the user controllable background is nice, and I bet that’ll be coming on the iPhone with 4.0 this summer.

There is a built-in keyboard, as well as a keyboard dock available, but how well does the built-in one work? It looks small and cramped to me, and I have big hands. I’m a little concerned that it wouldn’t function well for someone my size, but that I will have to wait and see.

I knew there would be a mobile version of iWork, I just didn’t know how it would function. It looks like it would be great for editing a story or making some quick changes, but I’m not so sure about hammering out a blog post or short story. That said, this will be a boon to travelers, as people can edit docs on the road quickly, then e-mail them right off, something the iPhone didn’t have. I think that Microsoft better get an iPad version of Office out there, otherwise more and more people will be transitioning onto iWork, which Apple has got to know.

The iBook and iBookstore is a neat concept. It’s turning the iPad into the Kindle, but with better graphics and ease of use. I didn’t see anything about magazines however, so who knows if anyone is going to or plans on jumping onboard. Frankly, I think they’d be dumb not to, as the infrastructure is there and it just might save publishing.

Speaking of, that NY Times app looked sweet. Time for people to get programming.

I gotta be honest, I was on the fence. Then I watched this video on the Apple site, and I gotta say, seeing it function really makes sense. Now the large black border around the edge has a reason – a place to put your hands – and the design looks more logical. I’m not sure how I feel about the price points because I’d want a lot of storage, but we’ll see how it goes. A year from now we’ll be talking about the 128gb iPad, and maybe then I’ll take the plunge.