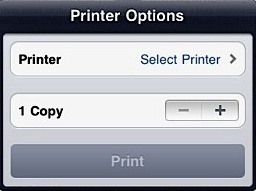 I love my iPad, but the more I use my iPhone 4, the more I wish for those added features. It’s a bit depressing really, because I keep wondering when I’ll get to have that multitasking goodness available to me. Turns out if I was a developer, that day could have been yesterday.

That’s because Apple released the iPad 4.2 Beta to developers yesterday. With it, came the aforementioned printing feature, but now it has a special name: AirPrint. And it turns out it’s coming to the iPhone and iPod Touch in November as well. From the official Apple press release:

AirPrint automatically finds printers on local networks and can print text, photos and graphics to them wirelessly over Wi-Fi without the need to install drivers or download software. HPâ€™s existing and upcoming ePrint enabled printers will be the first to support printing direct from iOS devices.

â€œAirPrint is Appleâ€™s powerful new printing architecture that matches the simplicity of iOSâ€”no set up, no configuration, no printer drivers and no software to download,â€ said Philip Schiller, Appleâ€™s senior vice president of Worldwide Product Marketing. â€œiPad, iPhone and iPod touch users can simply tap to print their documents or photos wirelessly to an HP ePrint printer or to a printer shared on a Mac or PC.â€

Fancy. I for one can’t wait for this feature, and I think it’s going to help pick up sales of the iPad. What’ll be more interesting though is seeing how people use it on the iPhone. I’m just waiting for an iPhone version of Pages to come out, because that might be a real killer app.