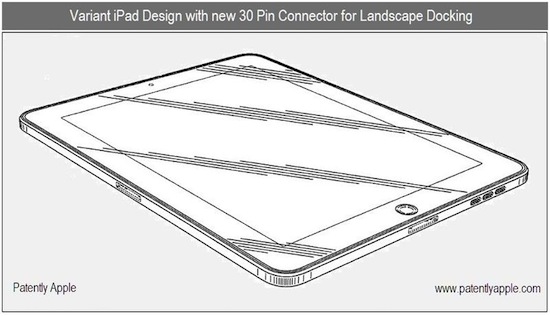 When it comes to new Apple products, it seems like everyone is always hunting for the next big scoop. Sometimes, the information can be found in Apple’s patent filings, which is where Patently Apple comes in. They’ve got some of the latest filings for the new iPad, and they show some new and welcome changes.

First, the landscape dock connector. This was a no-brainer to me, and I often wondered why it wasn’t there to begin with. But regardless, it looks like now there’s going to be a side-mounted dock for the iPad. Yay!

Second, the lower left corner of the iPad is apparently some kind of special feature. What is it? Patently Apple thinks it may be a smart bezel feature, something which Apple filed a patent for back in February, but there is no conclusive evidence to point one direction or the other. For now, it seems to be a mystery.

Third, is the inclusion of a front-facing camera. This has been a bit of a debate on the site, but it looks like the iPad 2 will come with a single camera, mounted to the front. What’s that? Only one? Blasphemy!

Well honestly, I could give a crap about a rear camera on the iPad. Seriously, it would be like taking a picture with a clipboard, and who wants to do that? Instead, I think having the single camera on the front works well with FaceTime, and that’s all it needs to do.