How to Sell A Product 101: iPad Guided Tours Available... 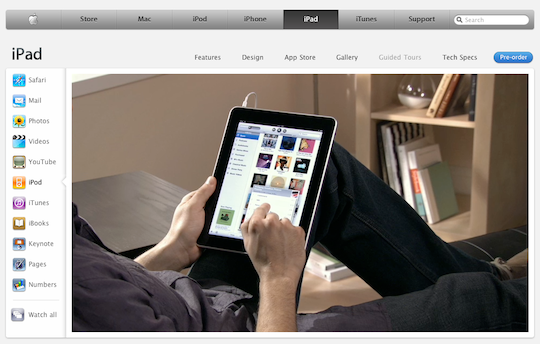 I remember when the iPhone 3GS first came out. I was at the office, checking out the latest news on the product, but I just wasn’t that excited about it. Not excited enough to replace my iPhone 3G, anyways.

But then they came out with the iPhone guided tour, and I was hooked. I knew that I had to have this new device, because it was lightyears faster than my 3G, and it just seemed like the right thing to do. You could make the argument that I’m easily influenced by shiny trinkets, but I’m pretty sure I already knew that.

Anyways, my wishy-washiness on the iPad has been pretty well documented here, but as I’ve said before, I’m considering getting one now. Then I saw the iPad Guided Tours available now, and I think you know what happened. OK, I didn’t go out and buy one immediately, but I did decide in my head that I was getting one, it was just a matter of when.

So what’s in these tours? Well for starters, everything. Each app is described in the video, including what makes it different for the iPad as well as how it all functions with multi-touch. I was a little concerned about the iWork apps – Numbers, Keynote and Pages – and how well they would function on the iPad. After watching the videos, I realize that they would fit into my workflow pretty easily, and I could even use it on the fly at a photo shoot if need be.

But the big sell here was with my mom. She’s been debating one for a while now, and now that she’s seen the videos, I think she’s sold. Maybe we’ll all go together the same way we did for the iPhone 3G 2 years ago.