You are here: Home / iPad / How to Run Flash on Your iPad 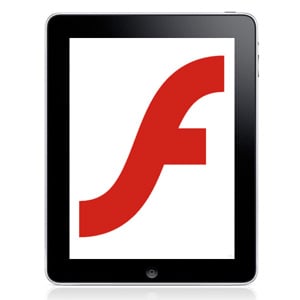 Apple has made it impossible to run Flash on the iPad. But what if you just have to run something Flash-based on your favorite tablet? Turns out, it’s not so impossible after all. Here’s how to do it.

Despite what Apple thinks, there are legitimate uses for Flash. Sure, HTML5 and JavaScript get more press these days, but plenty of websites still employ Flash animations, videos, and even web apps. So what’s an iPad owner to do?

You have three options. Let’s take a look at each. It’s the most obvious solution to the Flash conundrum: if Flash can’t run on iOS, then run it elsewhere and stream it to iOS. That’s exactly what remote server web browsers do. They do everything else that other web browsers do, but when you go to a website that’s running Flash, a remote server kicks in and runs that Flash operation for you and streams it to your iPad. I know, I know… It sounds like lag-o-rama. But it’s not nearly as slow as you think. It even handles your no-download RPG or MMO surprisingly well.

Pros: The tech behind these browsers has come a long way. Cream-of-the-crop browsers like Puffin provide a solid, lag-free Flash experience on your iPad that’s as close as technologically possible to a desktop browser.

Cons: There’s not one Flash-friendly iPad web browser of any quality that’s free. The remote desktop solution is the same basic idea as the remote server: run Flash offsite and stream it to your iPad. The difference is that in this case, the Flash operation is run somewhere a little closer to home. Namely, on your own computer. Remote desktop apps, as the name suggests, function as a window to your main computer’s screen. You can do a lot more than run Flash via a remote desktop — you can control more complex stuff like running apps, full-screen video games, and loads more. There are tons of these apps available (just search the App Store for “remote desktop”) and many of them even work with Windows PC desktops.

Pros: You’re using your own desktop or laptop to access Flash content, you’re just doing it remotely. It’s the convenience of your bigger, more powerful computer on a remote device.

Cons: Remote desktop apps don’t work over long distances, so it’s not a good on-the-go/travel solution. Speed is entirely at the mercy of whatever WiFi network you’re using. Security concerns mean remote desktops are not recommended for public WiFi hotspots.

By far the most extreme solution, jailbreaking your iOS device carries with it all sorts of consequences that shouldn’t be ignored, like voiding your warranty, endangering your iPad’s OS (and therefore, its entire usability), and depending on where you live in the world, may even be against the law.

That said, it’s certainly the most direct, the most “pure” solution, if you will, for getting Flash on your iPad. It’s not perfect, ’cause when it comes to iOS and Flash, there’s no such thing. Older iPads just don’t have the horsepower to smoothly run high-end Flash animations and web apps. But if you want to try it, it’s not hard to find instructions on how to make it happen.

Pros: It’s the only solution that lets you do the impossible — actually run Flash natively on your iPad.

Cons: It’s on the shady side, it’s dangerous to your device, and depending on which way the legal winds are currently blowing, it could lead to a run-in with the fuzz.

About the Author
Kirk Wallace is the Social Marketing Manager, Director of Content, and Host for MMO Attack. In his spare time, he enjoys playing guitar, traveling, gaming, and many outdoor activities.