by Kevin Whipps 12 years ago3 months ago
6 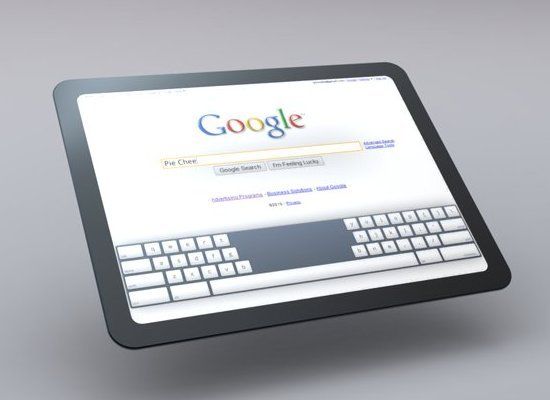 In the three years or so that the iPhone has been around, there have been a lot of iPhone killers. There was the G1, the BlackBerry Storm, The Nexxus … they all came and went with nary a peep. Closest thing so far is the Droid, and even that one doesn’t seem to have the staying power of the iPhone. None of that really matters though, because whether or not its true or not, Apple is the big target right now for anyone building a new phone, leading to lots of different versions of the iPhone killer coming down the pike.

I guess it shouldn’t be a big surprise to hear that there’s an iPad killer coming out. There’s the new HP tablet, which seems pretty cool on the surface, and then there’s talk about the Google Tablet, pictured above, and referenced in The Huffington Post. And you know what? It looks pretty cool.

Except here’s the thing: It’s vaporware. As of right now, the Google Tablet is just a myth. A unicorn tablet, if you will. If it ever does get produced, it’ll be pretty cool, and I’m sure they’ll sell lots of them.

Problem is, if they build it like it’s pictured above, they’re going to be building an iPad clone. By the time it’s actually built, the iPad will have moved on to V 2.0, or 3.0, or whatever it happens to be by that point. They’re chasing the dragon, just like everybody else.

Which is the same problem as the iPhone and all those iPhone killers. The premise goes like this: Design a product with all the same features of the iPad/iPhone, but add all of the things that Apple is lacking. Multi-tasking, tethering, cut & paste – whatever it is at the time. Then use those as the selling points for the phone, and a big diss against Apple.

So why doesn’t it work? It’s the base. Apple has a few million customers with credit card accounts on file, all using iTunes. Even if you don’t have an iPhone, chances are you have an iPod. So if you have an iPod, and all your music and/or videos are invested in the iTunes system, why buy into a new device that doesn’t support the iPod system? If you can’t sync it like your iPod, or use it with the music you already own, then why buy it? And therein lies the rub: Apple’s already got the customers, so the competitors have to come up with something better than the iPod way, then commit to that system for a long time. See: Made for Windows Media Player, Zune, Sony Atrac.

So the way I see it, people can talk about these iPhone/iPod/iPad killers until they’re blue in the face. Until another company comes up with a system better or more attractive than Apple’s, then it’s just not going to happen.

Of course, if anyone could do it, Google could.