by Joffy Cruz 12 years ago10 months ago

Apple has just released an iPad version of the popular music software Garageband. At first glance, it looks just like its desktop counterpart but itâ€™s actually much easier to control and has a few added bonuses. In my humble opinion, itâ€™s a great app to own whether you are a musician or an average iPad user.

While the iPad version is definitely more limited than the original, it has its advantages too. Youâ€™ll find that it contains some features not found on the desktop version. Itâ€™s also fun to use and has a user-friendly interface.

For the musician on the go, the software is great for quickly recording or writing down melodies. Letâ€™s say you want to jot down a few simple guitar riffs all you need to do is access the corresponding touch instrument and a playable guitar bridge will appear on the screen. Just hit the record button and start playing. You can even play whole chords with the touch of a button. However, only eight (pictured below) are available at the moment so hopefully Apple will come up with an update that will allow the user to build their own chords. 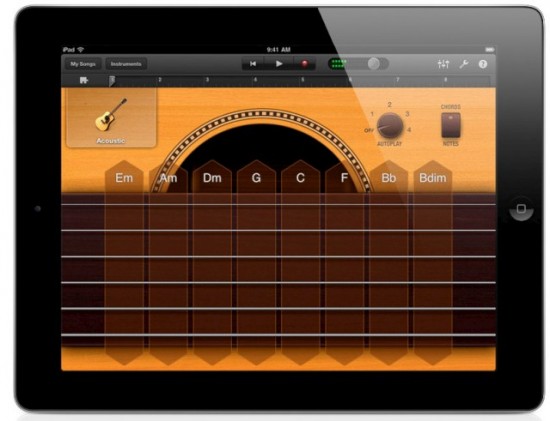 The fact that the iPad letâ€™s you touch the screen makes the recording process all the more interesting. It has keyboards, drum pads, drum kits, guitars, and basses to help simulate actual instrument-playing. It also has vocal effects and amplifiers for recording with a guitar. One can only do so much with the iPad version but compared to desktop Garageband, this one scores higher in the fun department.

Another feature the original version doesnâ€™t have is the sampler which can be a neat little tool when used properly. Itâ€™s basically a synthesizer that creates sounds based on what you record. For example, a dogâ€™s bark can be recorded and the sampler will produce a synth effect based on the bark.

The great thing about recording with the iPad version is that you can play the instruments without using a midi controller or guitar and record up to eight tracks per song. They even have â€œsmartâ€ instruments which do a bit of the composing for you and just like the original version of Garageband, you can easily construct songs using loops.
There are also editing options such as reverb, echo and volume control.

The only downside is that you canâ€™t upload directly to the desktop version of Garageband for further editing. You can, however, send your compositions to other people using the Garageband app and export to iTunes as ACC files. 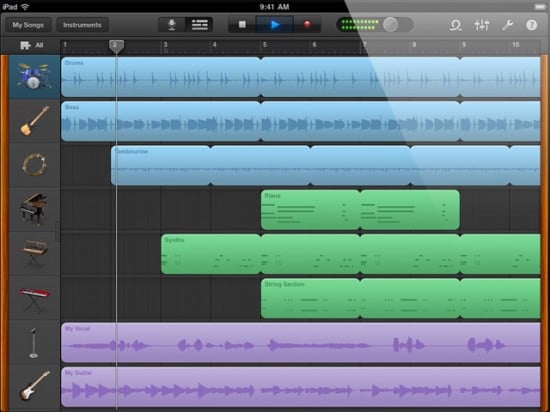 The touch instruments can also be used for live performance. Just connect the iPad to a PA system and you can use the touch instruments to play guitar, keyboard, bass or drums. They keyboard options, in particular, function as a great substitute for the real thing. Just be sure to use a jack with two outputs when plugging into the mixer to get a full sound.

Should I buy It Even If I Already Have the Desktop Version?

In the end, iPad Garageband is still a powerful music app and holds its own its bigger brother. Professional and casual musicians, music fans and the average iPad user shouldnâ€™t even have to think twice about purchasing this one. For $5 thatâ€™s a fair price considering its capabilities.

Get GarageBand from the AppStore.