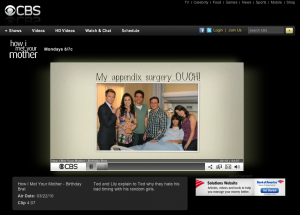 Raise your hand if you think the iPad is a big deal. Ok so, you, you, you … hey! You in the back! Are you flipping me off?

Well apparently, it is somewhat of a big deal, because people are workingÂ diligentlyÂ to produce good media for it, and we don’t even have the thing yet. Take CBS for example. Sure, it’s a big deal that Flash isn’t on the iPad/iPhone/iPod Touch, and sure, their whole video site is based on it, but no biggie right? They’ll just take the hit on viewers. As it turns out though, my grandmother’s favorite network is changing around their site to use HTML5 compatible video, according to MacRumors. Let’s let their words do some speaking:

With the imminent arrival of the Apple iPad, it seems at least one major television network is updating their website to provide video playback support for new tablet device — without Flash.Â CBS.com’s website began displaying a couple of strange “iPad – test” video links, first noted byÂ The Other Mac Blog.

We investigated further and found that clicking on these “iPad” labeled links in your normal desktop browser brings you to the usual Flash versions of these videos. Of course, these wouldn’t properly play on the Apple iPad due to Apple’s well known decision not to support Flash. However, if you visit CBS.com using the iPad SDK Simulator or spoofing your browser’s User-Agent to impersonate an iPad, you are sent to a different version of the video.

Interesting. This isn’t particularly surprising to me, mostly because of the popularity of Apple products. And if Apple doesn’t want to use Flash in their products, then people with either adapt or accept that they’re not a part of it. I don’t think CBS is willing to take that gamble, so they’re planning ahead. Smart idea.