Ballmer Isn’t Worried About the iPad 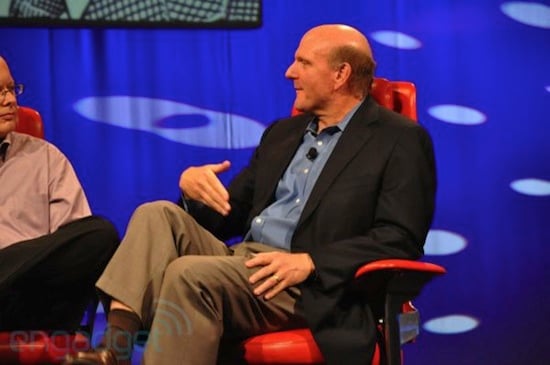 Steve Ballmer, CEO of Microsoft, was at the D8 conference today, and as the conversation progressed, so did talk about Apple. Engadget had the whole event covered, and they got a few choice quotes from Ballmer.

Walt: But Apple did make the iPad a productivity device too.

Steve: They built what they could build when they could build it. Is it a flat device? Well yes, but then you plug it into a dock when you need to do more typing on it. The ad from our competition in 3 years won’t be Mac vs. PC, it will be whatever this new device is versus the PC. It’s obvious that they’re moving in that direction, the Mac will keep its 3% market share… and the race is on.

Microsoft doesn’t get the tablet market. They tried it years ago and it didn’t go anywhere – but back then, it shouldn’t have anyways. Then they hear rumors of the iPad, so they go ahead and tell their vendors to make a few tablets to kick Apple’s butt. Out of those, the HP version sucked so hard they pulled it off the market, and nothing has yet appeared that I’ve seen of any value. Then there was the Courier concept, which wasn’t just beautiful, it looked like it would function well also – so they ditched it.

I’m not saying that the iPad is the best device ever built and that it’s going to change everything forever , but there is something to be said for the impact the iPad has made. To dismiss that so casually when the company that built it just passed yours in worth, well … that’s just dumb. Microsoft isn’t a hardware company, they’re a software company, so comparing themselves to Apple is a bit like comparing apples to oranges (see what I did there?). Windows 7 is doing well, but Windows Vista was such an abortion that they had to take it out back to kill it like Old Yeller. And what else does Microsoft produce that’s so revolutionary? Office? Really?

Fact is, Microsoft doesn’t create the revolutionary hardware, they create the software that runs on that hardware. And to say that they’re going to make something better than Apple is pretty bold. If they bring the Courier concept back, then they may have a fighting chance. But until then, they’re just chasing their tail.

And let’s not even talk about Windows Mobile 7.