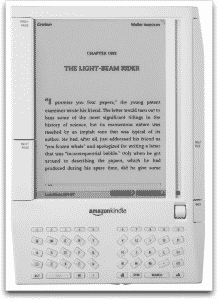 OK, so maybe that’s a bit of an exaggeration. But the fact is, Amazon isn’t too thrilled with the iPad, nor with its iBooks store. The iPad represents a huge threat to its e-book sales, and that’s a hit to the bottom line. Amazon does have an advantage, however. Leverage against the publishers. And guess what? They’re using it. BusinessWeek has a post about the subject, including Amazon’s talks to change pricing.

March 18 (Bloomberg) — Amazon.com Inc., the worldâ€™s largest Internet retailer, is in talks to change some prices of Kindle e-books by no later than the April 3 release of Apple Inc.â€™s iPad, two people with knowledge of the discussions said.

Amazon.com is talking to publishers individually about giving them more control over prices, said the people, who declined to be identified because the negotiations arenâ€™t public. Publishers said they want to be able to set the prices of e-books, with most new titles costing $12.99 to $14.99, compared with $9.99 currently.

So they’re taking the Apple approach. They want to control what they price books at, and that makes sense. I bet those negotiations are pretty civil.

Amazon.com is in talks with publishers about prices and has threatened to stop direct online sales of printed books from some of them unless they make concessions on e-books, the New York Times reported earlier, citing two unidentified industry executives with knowledge of the discussions. The retailer wants them to sign three-year contracts and guarantee that no rival will get lower prices or better terms, the newspaper said.

Now granted, Steve Jobs isn’t known for being the nicest guy on the planet, but he’s got the publishers selling books the way he wants it because of his success with movies and music. Now he turns to books and attempts to take on the biggest bookstore out there, a company with 90-percent of e-book sales in 2009, and he’s winning. Maybe Amazon was a pain in the ass to deal with, or maybe they overstepped their bounds in the past. Either way, I see this move by Amazon as pushing away the publishers even more and leading them down the road to the iPad.