by Robin Parrish 10 years ago3 months ago
2

Thin is in. That seemed to be the prevailing message at Apple’s final media event in 2012, which just ended a short while ago. Apple showed off new, razor-thin iMacs, a 13″ MacBook Pro with Retina Display, and the long-awaited iPad Mini. Here’s a complete rundown of everything you need to know.

The first thing that struck me while watching the streamed-live event — which is archived so you can watch it yourself right here — was how much Tim Cook sounded like Steve Jobs this go ’round. He’s never been monotone or anything, but particularly during his introduction, it sounded to these ears as if he was actually using Jobs’ vocal inflections, emphases, and superlatives. Has Cook been studying his late friend’s old keynote recordings?

I’m going to go over the new products in the order in which they were presented. After the usual “We’ve had the best sales quarter of all time” ballyhoo, Cook introduced…

Apple is releasing a brand new version of iBooks that adds a handful of new features. (At press time, the new iBooks app had not yet been posted to the App Store.) Chief among them is the long-overdue iCloud syncing, so that you can start reading on one device, save your bookmarks in the cloud, and then continue reading on another device.

One interesting new feature is called “Continuous Scrolling,” which is exactly what it sounds like: instead of turning virtual pages, your ebooks just scroll down and down and down forever, to the end of the book. It looked a lot like reading a web page made up of just text. While I’m sure there will be some who embrace this feature, there will no doubt be traditionalists like me who want to hold onto that experience of turning the page — even if it’s a virtual one.

My favorite feature of the new iBooks is that you can highlight any selection of text and share that quote straight to Facebook, Twitter, or email. That’s a very cool idea.

Phil Schiller strolled out on the stage to unveil, as expected, a 13″ version of the MacBook Pro with Retina Display. The new laptop looks like a worthy sibling to its 15″ big brother, boasting equally impressive specs. It’s 20% thinner than the last model, and weighs almost a pound less. There are two Thunderbolt ports, two USB 3 ports (one on each side), a headphone jack, dual microphones, SD card slot, and HDMI port. Just like the 15″ version, the optical drive has been removed, as well as the hard drive, which is replaced with all Flash storage. While it has a slightly smaller resolution than the 15″ model, it boasts marginally more pixels-per-inch. The screen measures 13.3″ diagonally, it runs on a 2.5Ghz Intel i5 processor, and pricing starts at $1699.

“You knew there’d be something called ‘mini’ in this presentation, didn’t you?” joked Phil Schiller as he introduced the new Mac Mini. This version soups up the innards while hanging on to the same exterior design. A quad-core processor has been added, which Apple says speeds it up over twice as fast as the last generation. Intel HD Graphics 4000 speeds up the visual power as well. The new Mac Mini starts at $599, and is available to ship today.

One of the most eye-popping moments of the presentation was when the brand new iMac was shown off that essentially brings the iMac in line with the MacBook Pro lineup. This was the one product Apple introduced today that had not been leaked beforehand, visually. The new iMac is a stunner with a razor-edge design. The basic appearance isn’t radically different than the last generation, but look closer and you’ll be astounded at just how thin it is. Apple achieves a certain illusion of thinness by curving the rear of the computer, so that the thing’s shape is kind of like a squashed-flat version of the original “Bondi Blue” iMac. But really, it’s “insanely” thin, as Mr. Jobs would say. 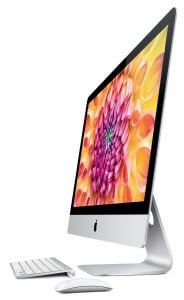 All that thinness — 80% thinner than the previous iMac — is achieved through a slew of new manufacturing processes that sound mighty impressive. Apple has laminated the display directly to the glass, which cuts out a few millimeters, and added an anti-reflective coating to the display to create 75% less reflectivity. The coolest new process is something Schiller dubbed “Friction stir welding,” which he said actually fuses together the molecules of the front and rear aluminum casings. Like the iPhone 5, these things are individually calibrated down to the nanometer on the manufacturing line to ensure they meet Apple’s standards. They also use up to 50% less energy than previous iMacs.

Inside, the optical drive has been removed, a FaceTime HD camera added, a higher-resolution display (which, interestingly, Apple is not touting as a Retina Display), dual mics, dual speakers, and all the upgraded bells and whistles you’d imagine. A big emphasis was placed on the storage options for the new iMac, which include the traditional hard drive, new Flash storage (which is faster than HDD but there’s less of it), and something entirely new that Apple has pioneered. It’s called an “Apple Fusion Drive,” and it fuses into a single volume 128GB of Flash storage and 1TB or 3TB of hard drive space, to create something that offers the best of both worlds: loads of storage space and faster read/write speeds. Particularly impressive is how smart the drive is; it comes with Apple’s most important apps pre-loaded into the Flash storage, but as you use your computer, the Fusion Drive “learns” which apps you use frequently, and shuffles them over to the Flash storage component, so you can instantly access the apps you need the most.

The 9th-gen iMac is a staggering 8 pounds lighter than the 8th-gen iMac, and comes in 21.5″ and 27″ models, maxing out at 3TB hard drive and 32GB of memory. It has 4 USB 3 ports, two Thunderbolt ports, headphone jack, a Gigabit Ethernet port, and an SDXC card slot. If you still need an optical drive, or as Schiller put it, “for those still stuck in the past,” Apple still offers the external USB Superdrive for $79.

A new version of iBooks Author has been released with loads of improvements and additions. It comes with new templates, Multi-Touch widgets that pop-up and scrolling sidebars that add even more interactivity to your ebooks, and more. You can now embed your own fonts into your ebooks instead of being stuck with the ones that Apple provides in the app, and there are some nifty new mathematical expressions available to utilize as well.

As the owner of a 3rd-generation iPad, this one kind of irked me — especially since it doesn’t really seem like a whole new version of the iPad, but a mild upgrade. The iPad 3 was launched just seven months ago, and already Apple is updating it with a newer one. The “4th-gen iPad” is identical to the 3rd-gen, it just offers a faster CPU that doubles the graphics performance, a Lightning connector, a FaceTime HD front camera, expanded LTE wireless, and faster Wi-Fi. (I didn’t include a picture of this one because it looks exactly the same.)

The iPad 4 (if you can even call it that… grumble, grumble) retains the pricing structure of past iPads. The Wi-Fi model ships November 2nd, while the cellular model didn’t get a firm release date, just a vague “two weeks later.” Pre-orders start this Friday, October 26.

Well, here it is: the iPad Mini. It looks somewhat like a shrunken iPad, but with a thinner bezel on the vertical sides to allow the screen to be as big as possible. Schiller said that the main difference between the iPad and the iPad Mini is that you can hold the Mini in one hand. Apple’s legendary genius marketing department was working overtime on this one to not position it as a competitor against other 7″ tablets, or even as a “reduced” iPad. As Jony Ive put it via video, Apple is considering it a “concentrated” version of the iPad. What I took away from the presentation was that Apple found a way to build a smaller iPad that can compete with other small tablets while maximizing the display space as much as possible. And the enclosure really is a lovely one — another solid piece of design from Mr. Ive.

But there was a telling moment when Schiller brought up a slide that compared the iPad Mini to Google’s Nexus 7 tablet — which along with the Kindle Fire will be the Mini’s direct competition. The iPad Mini features a roomy 7.9″ screen, weighs in at .68 pounds (“as light as a pad of paper”), and is just 7.2mm thin (“as thin as a pencil”). Unsurprisingly, each of these specs best the Nexus 7 and the Kindle Fire. The Mini comes in two flavors: black with a slate-tone black, and white with a silver-tone black.

Inside, the iPad Mini boasts technology that’s “equal to or better than” the iPad 2. Its display is the same resolution as the iPad 2 as well. It runs on an A5 chip, offers a FaceTime HD front camera, a 5MP iSight camera on the back, Lightning connector, LTE wireless, and a 10-hour battery life. The best part about the Mini is that every app that works on the iPad works on the Mini; app developers don’t have to do any work to optimize their apps for the Mini.

There’s even a new Smart Cover designed just for the iPad Mini. It comes in six colors (if you include the Product RED one), and will retail for $39. There’s also a Smart Case version that encloses the entire device that comes in the same colors, and sells for $49.

The iPad Mini starts with 16GB of memory and goes up to 64GB, just like the iPad. Pricing starts at $329, making for a nice price point for newcomers to enter Apple’s ecosystem. The cellular models start at $459. Like the iPad 4, pre-orders start October 26, with Wi-Fi Minis shipping November 2 and wireless shipping “two weeks later.” 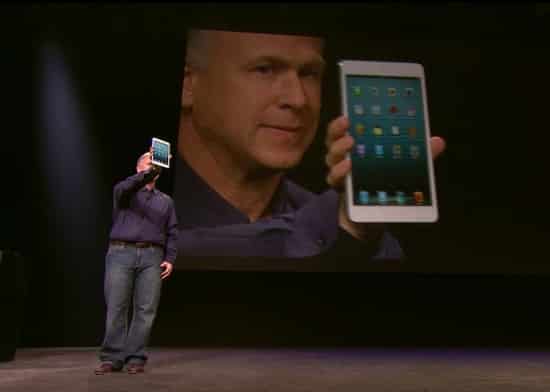 So now we have two different kinds of iPads. I get the Mini coming in time for Christmas, but why did Cook & Co. break with tradition and launch the latest generation of the main iPad several months early? (New iPads have always been introduced in January until now.) The iPad 3 was selling spectacularly, so an upgrade feels unnecessary — and is guaranteed to draw the ire of iPad 3 owners like me. I hope this isn’t a sign of things to come; it’s hard enough keeping up with Apple’s annual hardware updates already, without needing to shorten that cycle to half a year. Sheesh.

Plus, January is just a few months away, so it’s highly unlikely we’ll see a 5th-generation iPad then. So why pull this trigger so soon? Was Apple eager to move past the issues of the iPad 3 like its extreme heat and slow recharge times? Or was it something else? I can’t help wondering if they might they have something else up their sleeves planned for early ’13 — something big enough that the iPad needed to get out of the way of. Something like… iTV, perhaps? Probably not, but you never know.

Amid the deluge of new products and apps introduced today, there was no mention of iTunes 11, despite many predictions that it would debut alongside the iPad Mini.

Tim Cook has managed to refresh every major product in Apple’s catalog over the last year (sorry, Mac Pro), updating some long-overlooked devices like the iPod to true, next-gen, Retina-friendly status, while also introducing new stuff like the iPad Mini. It’s an impressive feat, but in retrospect, viewed as a whole, Apple’s 2012 efforts feel like a prelude to the next phase, don’t they? Almost as if Cook wanted to get his entire house in order before setting out for new territory.

But that’s probably just wishful thinking. What do you think 2013 will bring?