You are here: Home / Games / Review: World of Goo 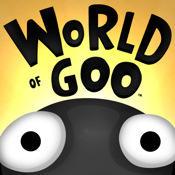 World of Goo is an iOS port of a downloadable PC/Mac game that’s also available as a WiiWare title. With loads of levels to play through full of relaxing, brain-bending fun, World of Goo represents something wholly unique for iOS devices. You play by picking up individual goo balls and using them to solve the game’s creative puzzles. Goo comes in many varieties;Â there are single-use goo balls, reusable goo balls, goo balls that are flammable, digital goo balls, and more.

Goo balls stick to each other, you see, creating flexible tendrils of goo between them. By moving the balls around the screen, you can build all sorts of geometric shapes that will help you solve the puzzles. Ragdoll physics are employed as well, adding an extra challenge; suspended goo ball structures will reach their breaking point and snap if their weight exceeds their sticking power. The game is broken down into chapters, each of which has a dozen or so levels.Â In each level, there’s a pipe through which the goo balls can exit, and your goal is to help them reach it. This often involves bridging great divides or building wobbly towers. The further you get into the game, the more creative and diverse the levels become, and I’m not ashamed to say that there were some I simply couldn’t figure out. The solutions are often elegant and simple, but require a bit of a cognitive leap to figure out. Fortunately, you always have the option to skip any level if you don’t want to do it. Complete or skip a level, and you instantly unlock the next one. The game’s soundtrack is an odd mishmash of world music and a sort of “classic Western movie” vibe. I’m sure many will dig it, but it was so repetitive it got on my nerves. And it represents a surprising oversight: 2d Boy didn’t see fit to include any basic options or settings, so there’s no way to turn off the music without also turning off the game’s clever sound effects — and the only way to do this is to mute your entire iDevice. You can move the game level around by dragging the screen, and pinch-to-zoom on iPhone and iPod Touch. There’s a mysterious “Sign Painter” in every level who leaves behind helpful signs to guide your efforts. There’s also a bonus meta game that’s only playable when you gain enough goo balls through the main levels.

What surprised me most about World of Goo is just how novel each new level is. There’s so much variety that it sometimes feels like you’re playing lots of different games in one. $4.99 may seem a little pricey for an iOS game, but World of Goo really is one of the best and most original gaming experiences that the App Store has to offer. It’s hard to believe the game started its life on other platforms, because it seems so perfectly tailored for this one.