You are here: Home / Games / Review: The Tiny Bang Story 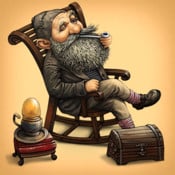 The home screen, near the beginning of the game

As someone who adores adventure games, as soon as I saw The Tiny Bang Story appear in the App Store, I knew I had to play it. I took my time playing through its lush, hand-drawn world, and here’s my verdict.

The Tiny Bang Story took the indie gaming community by storm last year, racking up loads of accolades from PC gamers who downloaded it via Steam. Created by a two-man Russian developer called Cilibri Games, this critical darling is finally making its debut on iOS — exclusively for iPad. A smart move, as the iPhone’s smaller screen couldn’t possibly do justice to the gorgeous imagery found in the game. But I’m getting ahead of myself. Launch The Tiny Bang Story, and you’re presented with the image of a small, charming planet. It’s a planet in a mild state of turmoil, as a meteor hit has caused it to fall apart (in a gentle, family-friendly sort of way). There are no instructions, no words or writing of any kind. You simply feel your way through the game intuitively, letting it draw you in to this quaint little world, its handful of inhabitants, and the many brain teasers scattered throughout. A perfect example of the game's amazing art

The game is divided into five chapters, which are represented as districts of this planet. Each district requires you to complete a number of tasks in order to proceed onward, and once you defeat that chapter, a new set of jigsaw puzzle pieces are unlocked for you to carefully put the larger planet image back together. Most of the puzzles begin as hidden object games, with tiny bits and baubles that you have to find throughout the landscape in order to activate one of over thirty minigames. An underground home that reminded me a bit of 'The Hobbit'

These minigames present a really nice variety of puzzles for solving, ranging from shifting tile puzzles to Simon-style audio pattern replication. A pair of the more clever minigames have you controlling old school 8-bit video games on virtual screens. Finish the entire game, and you unlock a special mode that lets you return and play any of the minigames again at your leisure. None of them are terribly taxing, often just challenging enough to keep you coming back for more. More of that magnificent art

For me, the best aspect of the game is undoubtedly the art. There are almost sixty hand-drawn, full-size screens, and they’re a joy to behold. I fear that my words don’t quite do the art justice, because it’s utterly enchanting work, worthy of framing and hanging on museum walls. The Tiny Planet is a quaintly whimsical place, filled with cozy, surrealist objects, structures, and inhabitants. Something about it brings to mind the hand-drawn illustrations that J.R.R. Tolkien included in his early editions of The Hobbit; it’s not a stylistic similarity, but a tonal one, and that particular brand of artistry is showcased all too rarely in video games.

To sum up: I’m unashamedly in love with the art in The Tiny Bang Story. It’s lovely. Gorgeous. Spectacular! And worth the price of admission alone. Fortunately, the gameplay is fun enough to match the art. I wish I could say the same about the musical score. (It’s available to download for free, here.) It’s far too muzak-like for my taste, overly repetitive and seemingly focused purely on engendering a state of relaxation. Which makes it unnecessary, as the game already does a fine job of soothing the player with its visuals and animations. The music isn’t terrible by any means, but it’s hard not to hold every aspect of the game to the high standard set by the artwork. An odd glitch I encountered; why won't the red lines line up?

I never experienced any crashes, but I did have a particularly odd bug with one of the mini games. For this particular puzzle, a trio of gears rotate simultaneously with one another, and if you do it right, a red line on all three is supposed to line up vertically. But no matter how many times I spun the gears, in whatever direction, it would never form a perfect line. (See the screenshot, above.) It was as if one of the virtual gears was off by one or two spokes. I finally looked up a game guide online to get the numeric combination that this mini game was supposed to unlock. I hate that I had to cheat, but without that code, I couldn’t proceed any further, and the game wouldn’t allow me to get it. Come on. That's just awesome. My eyes just want to study and take in every little detail.

The Tiny Bang Story gets 5+ stars from me for the art, 5 for the gameplay, and 3 for the music. I also must take into account that strange glitch with the gear puzzle. But regardless of my experience, this is one journey that is absolutely worth discovering for yourself and forming your own opinions about. I strongly recommend it to every adventure gamer, without hesitation — or to anyone who loves good puzzles and beautiful art.