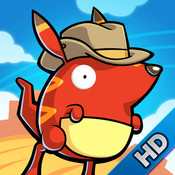 What groundbreaking game would you expect to come next from the makers of Scribblenauts? Their answer might surprise you, but in a way, it’s every bit as innovative.

Run Roo Run assigns you a single task: getting a kangaroo from one side of your screen to the other. Along the way, you’ll encounter all sorts of obstacles that must be jumped over, as well as some fun twists to the game mechanics that come along after every set of levels.

But let me back up a bit.

The minimalistic story presented at the outset has Roo, a mother kangaroo, chasing her kidnapped baby Joey across Australia. It sounds pretty heavy for a cute  little platformer, but 5th Cell presents it like a lighthearted Wile E. Coyote cartoon. All that really matters is that you’re a kangaroo hopping your way across the screen. The game has the feel of a side-scroller, but it’s not; the screen never moves. Instead, you simply try to guide Roo across the screen and avoid the traps and obstacles along the way, so every level is a single screen. The controls are a study in the simplicity of design. Roo will move forward on her own, you just have to tell her to start, and when she needs to jump. Both of these actions are activated with a single tap on the screen. You don’t even have to touch the area of the screen where you want her to jump from or to; a single tap anywhere on the screen will instantly make her jump.

As you advance through the game’s many, many levels, the obstacles multiply and become ever more complex, with different kinds of obstacles, double jumps, elastic materials to spring from to jump further, anti-gravity, and so on. Ultimately, the game comes down how well you can strategically time your jumps. There’s a time clock running every time you start a new screen, and medals are awarded based on how fast you pass that screen; the time is cumulative, though, so each time you restart a screen, it adds to your final time, resulting in a lower score. (An easy cheat for this is to simply restart the screen, which restarts the clock.) There are the usual leaderboards through Game Center, which let you compare scores against your friends. Progression through the game is marked with a map screen, which shows the line you trace through Australia. Screens are grouped into chapters, each of which includes a few added “extreme” levels, that are just as hard as they sound. There are twenty chapters that come with the game initially, but what gives the game some of its innovation is that once you buy the app, it automatically delivers a new chapter to your device once a week (for ten consecutive weeks) — at no additional cost or effort from you. Downloadable content is certainly nothing new for gaming, but it’s nearly unheard of for arcade or puzzle games, and having it auto-delivered gives Run Roo Run the feel of 5th Cell trying something new — and possibly revolutionary. Many an iOS puzzler or platformer can be played once or twice, and then forgotten about in favor of something new and different. By design, Run Roo Run has a built-in way of guaranteeing that players will keep returning to the game, and it could herald a whole new way of gaming on portable devices.

Fortunately, it’s fun enough to give you a good reason to keep coming back. It has a high degree of polish and perfectly hits the sweet spot between “easy to play” and “hard to master.”