You are here: Home / Games / Review: Lamp of Aladdin 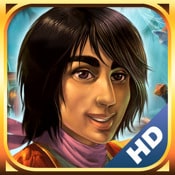 Lamp of Aladdin for iPad is aÂ match-3 game that wants to be a platformer. Instead of matching three colors to score points or clear the board, you’re trying to clear a path for a tiny version of the game’s title character. It’s a clever twist on the match-3 formula, that unfortunately falls short of its goals due to some clunky storytelling and tedious level-grinding. The story — if you can call it that — is a standard take on Aladdin finding the Genie’s lamp and making his wishes. But I’m not actually sure why they bothered with a narrative, because it’s horribly written and the voice acting is some of the worst I’ve ever heard. The Genie sounds like somebody’s roommate was asked to do the worst possible impression of Disney’s version of the character (he even calls Aladdin “Al”), and Aladdin sounds more like a twangy Huck Finn than an Arabian prince. You never feel like he deserved to have found that lamp, so it’s impossible to root for him. Note to game developers: annoying protagonists are no fun. The gameplay sends you across an Arabian landscape, solving puzzles in order to win the heart of the Sultan’s daughter. (And by “win the heart,” I don’t mean “romance the girl” — I mean “pay off the father.” Uh, yeah.) At each stop, you’re first asked to solve a scavenger hunt, which I actually enjoyed a lot more than the regular, match-3 levels. These hunt boards are beautifully rendered paintings with some lovely special effects and lots of hidden goodies to find, and they offer a greater sense of accomplishment than any other part of the game. Once the scavenger hunt is complete, you’re granted passage to the main, match-3 levels, which are arranged like horizontal Bejeweled boards. A tiny version of Aladdin waits patiently for you to clear the road ahead, so he can move on. These levels don’t pose much of a challenge until near the end of the game, because very often when you make a match, it sets off a chain reaction that clears a good chunk of the board for you. Aladdin moves like a platforming avatar, only you don’t control him — you control the board. Needed items must be collected, such as a bridge for him to walk across to the next part of the level. These levels are engaging enough at first, but after a few boards with no real variety, I found myself slogging through them just to get back to the handful of scavenger hunts. What little variety there is, is standard match-3 stuff: ice cubes that must be broken, etc. If you get stuck in a spot where you just can’t make a match (which happened to me only once throughout the entire game), the Genie is always there to help with a little magic. You also have access to a limited supply of bombs, found throughout the levels, which can break through a difficult area for you.

The HD iPad graphics are bright and easy on the eyes, and the sound is equally well done. I never experienced a single glitch or crash, so the developers certainly know how to assemble some solid code. Which made me really want to like Lamp of Aladdin.

I wish that I had.