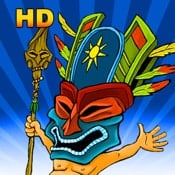 Kona’s Crate is one quirky little puzzler. The game has you controlling a floating platform that carries a simple wooden crate. Your job is to maneuver the crate up and down and between obstacles to deliver it Chief Kona.

The catch? The crate isn’t locked down to the platform. Kona's Crate | If this view is available on the level title screen, why isn't it the default view? Kona's Crate | Get used to seeing the crate fall off the platform. You'll be seeing it A LOT.

The trick is that the controls are the most hair trigger I’ve ever seen in an iOS game. You not only have to move the crate, you have to keep it balanced atop the platform, and it’s a lot harder than it sounds. You play throughÂ 60 levels across 3 stages, and just as you’d expect, the levels become more difficult the further you go. You’ll also unlock more levels as you go, working up to the full 60. (IndiePub, the publisher, promises additional levels to be added regularly at no additional charge.) Eventually, additional obstacles are added for you to make your way around, like steam vents that will blow the crate off your platform and TNT-filled crates that explode at slightest touch. Kona's Crate | Chief Kona does a happy dance when you succeed

Before a level begins, you’re presented with a title screen that displays some basic details about the level and shows you what it looks like. This is one design element that didn’t make sense to me. You can use pinch or single-finger dragging to get a good look at the level, which is handy, but it always starts with a close-up on your starting point. It always helps to pinch-to-zoom out to an overview of the entire map, so you know what to expect. So why didn’t the devsÂ start these title screens with the far more helpful level overview? It’s a small thing, but with the levels coming so quickly one after another, it becomes very tedious to have to zoom out every single time. Complete a level fast and you’ll earn a higher score. You’ll also get extra points for not touching any of the walls along the path. Speaking of the levels,Â I got a very “retro platformer” vibe from playing Kona’s Crate, even though it puts the iOS platform’s touchscreen controls to good use. The level design made me think of classic titles like Commander Keen. It’s the incredible physics of the crate and the platform that make Kona’s Crate both engaging and infuriating. The slightest tap against a wall can upset your balance, and it’s all but impossible to recover your crate after losing it. You’ll find yourself hitting the Level Restart button (in the top right corner)Â a lot. Like, every few seconds, even. I only succeeded when I moved the crate very slowly, and controlled the platform with short, quick bursts from the thrusters. I always got low scores for not going fast, but I didn’t possess enough finesse with the controls to play any other way. The players who will excel at Kona’s Gate are the ones who can master that finesse.

Some of the game’s challenges are so frustratingly hard,Â you might develop a mild case of masochism from playing it.Â Because darn if it isn’t impossible to put down.