You are here: Home / Games / Review: Doctor Who: The Mazes of Time 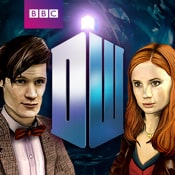 The eleventh Doctor, as played by Matt Smith, has found his way onto the iPad in Doctor Who: The Mazes of Time, an adventure/puzzle game that lets you control his actions. The Doctor’s current companion, Amy Pond, is also along for the ride.

The story — which is barely there — finds the Doctor and Amy trying to track down the members of a family of space-faring adventurers, who have been scattered across space and time by the Doctor’s oldest and greatest enemy — the Daleks — though you’ll encounter others, like Cybermen, as well. The game consists of numerous episodes, each of which includes several room-shaped levels. Every room is essentially a grid of squares, and holds a puzzle of some kind to solve. Most of these are very simple, although a few may prove challenging to your brain cells. From a top-down perspective, you use a virtual joystick to send this dynamic duo of travelers wherever you want them to go. The Doctor often has to climb up and over obstacles, or move blocks along the room’s grid. Amy, by contrast, is able to crawl under obstacles. There are floor switches galore, and the usual spikes that raise up out of the ground. It’s all very standard stuff, but the game has nice graphics and it captures enough of the show’s quirks to be fun. The game’s dialogue comes close to striking the tone of the beloved TV show, even if there are some cringe-worthy lines here and there. Sadly, Amy and the Doctor’sÂ reparteeÂ takes place entirely inside text bubbles, with no actual voice work from either actor. Of course, building that many audio files into a game would drastically increase its memory footprint, which would lessen the appeal for most. The music is one of the best parts of the game, using Murray Gold’s fantastic Season 5 themes right into the game. Alas, the music is also one of the game’s weaknesses, as it takes single tracks of a few minutes’ length, and loops them ad nauseum while you play through a level. As fantastic as the music is, anything this repetitive can grate after a while.

Both the Doctor and Amy must be steered and directed through every map — separately. Sometimes this is a smart necessity, as there are some obstacles and puzzles that only one or the other can clear, which then makes way for the other to follow. But the rest of the time, it can be a cumbersome nuisance, forcing players to guide the Doctor all the way through a room, and then having to repeat the process for Amy. It’s a lazy game mechanic that could have been handled in a smarter way. Originally released at $4.99, Doctor Who: The Mazes of Time was recently dropped to just $.99. It was a smart move, because it feels much more like a $.99 app. There’s several hours worth of gameplay here, but the quality and polish just aren’t high enough to recommend to anyone but the hardcore fans.